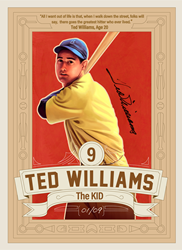 On April 20th, 1939, the greatest hitter who ever lived, Ted Williams, made his Boston Red Sox major league debut. He would go on to bat .400, a record which still stands today more than 80 years later. Williams’s legacy would include serving our country as a two-time war veteran and being an outspoken defender of Civil Rights. Up for auction are 73 pieces of cutting edge blockchain art honoring this baseball icon and American hero.

Ted Williams Legendary Series NFT Collection:
Celebrate Ted Williams with world renowned artist Black Madre in the release of 9 limited edition NFT baseball cards commemorating the legendary career and life of one of the greatest Red Sox players. The Ted Williams Legendary Series NFT Collection will feature stats and stories of the life of Ted Williams. Each card is hand drawn and illustrated by coveted artist, Black Madre. Each card is also digitally signed with the beautiful signature of Ted Williams and are limited to just 9. Each edition will be minted on the blockchain and the series will never be replicated. Collect cards 1-8 to be eligible to bid on the rare 9th card, an exclusive 1-of-1 Ted Williams “Crown Jewel” (the Splendid Splinter), with unlockable content and additional prizes. This is an exclusive opportunity to own a piece of unique digital memorabilia of an American Hero & Hall of Famer, Ted Williams, as well as Ethereum blockchain representing these beautiful pieces of art created by Black Madre Visual Arts Studio in conjunction with Green Diamond Sports. http://www.TedWilliamsNFT.com