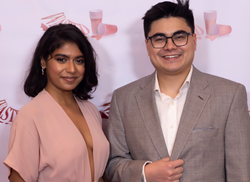 We’re so excited that Hulu is giving us the space to tell our story, as diverse POC friends who grew up in a conservative area. Prathi and I actually met back in high school, and to write this script, we spent every day for two years mining our own adolescences and laughing through tears.

The writing team of Prathi Srinivasan and Joshua Levy has contributed to such popular shows and projects as “Titans,” “iZombie,” “Bollyweird,” HBO’s “F**cked Up,” and more—and now their latest comedy, the Hulu original film “Plan B,” starts production for Counterbalance Entertainment (“Cobra Kai,” Harold & Kumar Go to White Castle) and American High (The Binge, Big Time Adolescence) in October 2020.

The Levy & Srinivasan writing team’s signature is a frequent mix of smarts, humor, emotion, and topicality, and all are found in abundance in “Plan B,” the story of a prim and proper high school student struggling with the challenges of adolescence and awakening sexuality. After an unhappy and ill-timed first sexual encounter, she finds herself confronting an even more stressful aftermath—when she and her slacker best friend have just 24 hours to find a “Plan B” pill in a deeply conservative town in America’s heartland.

“We’re so excited that Hulu is giving us the space to tell our story, as diverse POC friends who grew up in a conservative area,” comments co-writer Joshua Levy. “Prathi and I actually met back in high school, and to write this script, we spent every day for two years mining our own adolescences and laughing through the tears. We were these two A.P. kids who played Yu-Gi-Oh! and binge-watched DBZ—and we became best friends in a sea of Caucasity.” Adds co-writer Prathi Srinivasan, “Josh was discovering his sexuality while I was coming to terms with my conservative upbringing, and through it all, the only way we stayed sane was by having each other to lean on.”

A risky, funny, empowering, and uniquely personal coming-of-age story, “Plan B” provides comedy, emotion and edge in equal measure—and the writers were delighted to be a part of the production. “We were huge fans of Harold & Kumar when we were growing up—it was such a milestone for us, so an Indian girl and an Asian guy working with Counterbalance on this was the perfect fit,” adds Prathi. “It felt a little bit like fate!”

“Plan B” will be directed by actress/director Natalie Morales (“Dead to Me,” “Santa Clarita Diet,” “Room 104”), who is making her solo feature directorial debut with the film, and production begins in Syracuse, New York in October 2020.

Directed by Natalie Morales and written by Prathi Srinivasan and Joshua Levy, “Plan B” was produced by Jon Hurwitz, Hayden Schlossberg, Josh Heald, and Dina Hillier of Counterbalance Entertainment, along with Jeremy Garelick, Will Phelps, and Ryan Bennett of American High, Mickey Liddell and Pete Shilaimon of LD Entertainment, and Matt Lottman. The film begins production in October 2020 and will air on Hulu.

About Prathi Srinivasan and Joshua Levy

Prathi is an immigrant who grew up in the bustling city of Chennai, India, and moving to America was a culture shock that resulted in her passion for characters who are stuck between where they come from and where they are going. Meanwhile, Joshua writes about his own unique family, friends and experiences, and credits his Chinese grandmother (a survivor of WWII), and his father (a street-kid from the projects in Brooklyn), for giving him his obsession with storytelling. Best friends since high school, Josh and Prathi are committed to telling great stories that are funny, real, diverse, and always topically relevant. Learn more about them and their web series “Bollyweird, via YouTube, Facebook, and Instagram.

To discuss “Plan B,” Joshua Levy and Prathi Srinivasan are currently available for interviews and streaming media appearances. To request an interview, please contact Angela Mitchell at news [at] paranoidpr [dot] com or (904) 982-8043.