Each year an average of 17.6 billion pounds of plastic particles end up in the ocean. While the impacts on marine environments are widely studied, little is known about microplastics in freshwater ecosystems. The Tennessee Aquarium and the University of Georgia's River Basin Center will address many of the challenges associated with freshwater microplastics research by bringing many experts together for an online workshop. 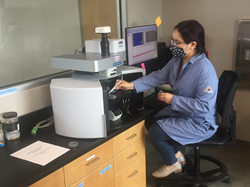 “There are currently no accepted standard methodologies to collect and identify microplastic pollution, as the field is developing so quickly. Many researchers are frustrated by this situation” - Dr. Krista Capps, assistant professor, Odum School of Ecology and Savannah River Ecology Lab

It is the inevitable destiny of all water that falls on land to eventually return to the sea. And like an enthusiastic tourist, it can’t help but pick up souvenirs along the way, whether it’s dirt, fertilizers or — as many scientists now suspect — plastic.

In recent years, the world slowly has awoken to the, ironically, enormous impact microscopic plastic has on marine life. Every year, an average of 8.8 million tons (about 17.6 billion pounds) of plastic fragments or manufactured plastic objects measuring smaller than five millimeters across enter the ocean. There, they’re consumed by microscopic organisms and eventually work their way up the food chain to humans.

Although the bulk of plastic waste originates inland, microplastic is largely seen as a coastal issue thanks to images of plastic debris piled up on beaches or found inside marine animals. Little is known about how this plague of plastic affects the rivers, lakes and streams through which it passes on its way to the sea.

On Sept. 14, the Tennessee Aquarium Conservation Institute hopes to make inroads to answering that question as host to a virtual workshop on freshwater microplastic research. The workshop was organized in partnership with the River Basin Center at the University of Georgia.

Among other topics, participants in the one-day summit will focus on developing standards to ensure current and future researchers can reliably compare and build on each other’s findings.

“In a new field of research where so many different methods are being used, it is extremely important that studies are designed and conducted so we can compare and replicate results from different labs,” says Dr. Anna George, the Aquarium’s vice president of conservation science and education.

“Not only will these studies improve our understanding of how plastic pollution reaches the ocean, they will also provide insight into an emerging threat to maintaining clean water for us all.”

The workshop initially was scheduled to take place in April at the Conservation Institute’s headquarters on the banks of the Tennessee River. However, the ongoing health crisis necessitated a different approach, and it now will be held via Zoom video conference.
Dr. Krista Capps, an assistant professor with the Odum School of Ecology and Savannah River Ecology Lab, helped organize the workshop of 50 participants. Her research into how microplastic is affected by water treatment facilities has been hampered by a lack of agreed-upon research standards.

The issues caused by this absence of structure spurred the idea for the upcoming workshop, Dr. Capps says.

“There are currently no accepted standard methodologies to collect and identify microplastic pollution, as the field is developing so quickly,” she says. “Many researchers I contacted were also frustrated by this situation. The workshop is an outgrowth of my search for expert advice and a quest to develop standard quality assurance and quality control protocols for sampling and analysis.”

“Plastic pollution is a problem that affects everyone,” Dr. Capps says. “The greater diversity of stakeholders and academic disciplines involved in working on this problem, the more holistic our approach to understanding plastic pollution will be.”

The workshop will feature presentations by several experts, including:

Dr. Fath made headlines in 2017 with a record-setting marathon swim of the entire 652-length of the Tennessee River. During this 34-day undertaking, he and his team took daily measurements of various water quality indicators, including the presence of microplastics. With data from locations along the entire course of the river, this “swim for science” represented one of the first comprehensive studies of how microplastic moves through freshwater systems.

Analysis of the project’s findings found microplastic levels in the Tennessee River that were 80 times higher than Dr. Fath detected during a similar study of Germany’s Rhine River in 2014. These results were a clear sign that microplastics have a greater, if largely uninvestigated, potential to impact freshwater sources than previously assumed, Dr. George says.

“Some freshwater-focused scientists, myself included, thought plastic in freshwater was moving out to the ocean so quickly that it probably wasn’t having a major impact on freshwater habitats or animals,” she says. “Dr. Fath’s work demonstrated that there was enough microplastic pollution in freshwater habitats that we needed to learn more about its impact in our streams and rivers.”

To learn more about the River Basin Center at the University of Georgia, visit ecology.uga.edu.