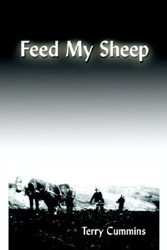 'Feed My Sheep' follows Cummins and his grandfather as they struggle to survive the Great Depression and World War II. He also discusses today’s society, juxtaposing the age in which he was a young man with modern times.

In 1968, author Terry Cummins attended a service at Westminster Abbey in London. It was there that Cummins heard a sermon based on John 21:15–17, in which Peter asks Jesus how he can love Jesus more. Jesus replied with, “Feed my sheep.” This sermon greatly affected Cummins, as his grandfather took care of sheep on his farm. He knew at that moment that he would one day write about his grandfather.

Cummins pays homage to his grandfather in his memoir, “Feed My Sheep” (published by AuthorHouse). Cummins will be pursuing a wider audience for his book using new marketing materials, including a video advertisement.

Cummins grew up on a 444 acre farm in Kentucky, where his grandfather raised and cared for sheep. Following the Civil War, his great-grandfather bought the land and built the house Cummins would later be raised in.

“Feed My Sheep” follows Cummins and his grandfather as they struggle to survive the Great Depression and World War II. He also discusses today’s society, juxtaposing the age in which he was a young man with modern times.

Cummins hopes to show readers the extreme difference between today’s era and the past, pointing out such things as growing up without electricity to using the internet. Cummins believes that by showing readers how people once lived, the human condition of today can be bettered for tomorrow.

About the Author
Terry Cummins was born in the hills of Pendleton County in Kentucky, in the house his great-grandfather built after fighting in the Civil War. He grew up on the family farm, part of which had been in his family for 144 years. He has a bachelor’s degree from Transylvania University and a master’s degree from the University of Kentucky. “Feed My Sheep” is the first of his six published books. More information is available at http://www.terrycummins.net.

AuthorHouse, an Author Solutions, LLC self-publishing imprint, is a leading provider of book publishing, marketing, and bookselling services for authors around the globe and offers the industry’s only suite of Hollywood book-to-film services. Committed to providing the highest level of customer service, AuthorHouse assigns each author personal publishing and marketing consultants who provide guidance throughout the process. For more information or to publish a book, visit authorhouse.com or call 1-888-519-5121. For the latest, follow @authorhouse on Twitter.
###