"Dutybound" is a coming-of-age, dark fantasy novel providing a social commentary on the absence of empathy and altruism and rediscovering faith that’s long been lost 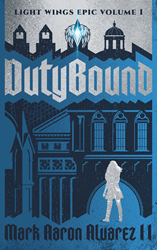 Sometimes, we have to look at the darkest parts of ourselves, or experience misfortunes, in order to define what’s right. What we know shapes us more than we realize, and if we don’t pay attention, we might limit ourselves by conforming into ideologies that lack sincerity, compassion, or virtue.

As long as there is light, there is hope. This sentiment and more abound in author Mark A. Alvarez’s debut novel, “Dutybound,” (June 22, Books Fluent), in which discovering faith and morality culminate in an epic fantasy where we are encouraged to destroy the beliefs that limit us and our destinies.

Readers will dive into the world of Terestria and its Virtues, heirs of nobility forced to face the Sins of their forefathers and bring their world from the brink of Darkness. Among them is Lucia, High Maiden to the province of Moz and chosen of the Light Wings. This ancient relic, bestowed upon a long-forgotten civilization by the Light itself, was forged to harbor the Light's essence if Terestria's balance were threatened by the Darkness’ desire to corrupt its most-prized creation: Life. If successful and the long-standing covenant between the Light and its Protectors were ever to be broken, the Darkness would be free to roam Terestria and reclaim the land it had a hand in creating — bringing death and destruction to every corner of the world. With the help of the Light Wings and its power, Lucia must heed its call to assemble the Light's Virtues and lead them into battle against the very Sins that seek to destroy their world.

“Dutybound: Light Wings Epic Vol. 1” is a journey of self-discovery, as these heroes face conflict both from outside and within themselves. Duty, desire, envy, hope, hate, love, pride and temperance all are challenged within this bold tale that is sure to have readers pondering their own true nature.

Mark A. Alvarez II is a Hispanic-American born in Houston, Texas. A gunshot survivor and first-generation college student, Alvarez graduated from Texas State University in 2017, with a degree in public relations and mass communication. He is also a graduate of the NEW Apprenticeship, the first tech-apprenticeship program accredited by the US Department of Labor. Alvarez is the Founder & CEO of Light Wings Promotions LLC, a digital marketing and creative branding agency in San Antonio, Texas, where he currently resides.