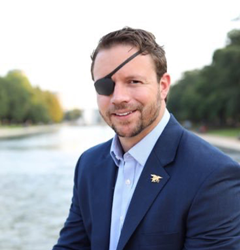 In 2018, without any political experience, political connections or personal wealth to fund a campaign, Dan was faced with a rare opportunity to run for Texas’s Second Congressional District. As a Lieutenant Commander (retired) and former Navy SEAL, he saw this as another opportunity to serve his country, a worthy goal despite the challenges he would face as a new candidate. He advanced from the crowded primary into a two-way runoff, which he decidedly won with nearly 70% of the vote. He went on to defeat his Democrat opponent and was sworn into Congress in January 2019.

Ever the public servant, Dan knew from a very early age that he wanted to serve in the most elite military force in history: the U.S. Navy SEALs. His father’s career in the Texas oil and gas industry moved his family all over the world, including Ecuador and Colombia, but his desire to serve America deepened while he lived outside the US. Everything Dan did was to ensure he became a SEAL. After graduating from Tufts University, where he earned his Naval officer commission through Navy ROTC, he reported for SEAL training in Coronado, CA.

In 2012, on his third tour of duty, an improvised explosive device left Dan Crenshaw's right eye destroyed and his left blinded. Only through the careful hand of his surgeons, and what doctors called a miracle, did Crenshaw's left eye recover partial vision.
And yet, he persevered, completing two more deployments. Why? There are certain stories we tell ourselves about the hardships we face - we can become paralyzed by adversity or we can adapt and overcome. We can be fragile or we can find our fortitude. Crenshaw delivers a set of lessons to help you do just that.

During this hour-long conversation, Crenshaw will share his unique perspective about transitioning from service member to Congressman, his reflections about his journey as a Navy SEAL and what our country asks of the families that support our troops.

This session will be hosted by former Navy SEAL Brent Gleeson, Founder and CEO of TakingPoint Leadership, and bestselling author of TakingPoint. Gleeson serves on the Board of Directors for the SEAL Family Foundation.

Registration is now open https://www.eventbrite.com/e/town-hall-live-with-us-congressman-dan-crenshaw-tickets-109431289934 - with the offering of two donation tiers of $50 and $100. With a $100 donation, registrants will receive a signed copy of Fortitude.

Founded in 2008, The SEAL Family Foundation is a non-profit, 501(c)3 organization focused on delivering specialized programs in direct support of Naval Special Warfare (NSW) families. By delivering customized individual and family readiness programs specifically targeted to assist the unique needs of the NSW community, we seek to assist in maintaining a resilient, sustainable, and healthy force in this era of persistent conflict and frequent deployments.