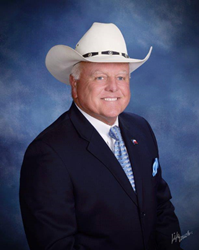 "technology like this is a gamechanger. Cleaner farms, healthier animals, better environment all around. This is the kind of product that gets mass adopted - fast."

This week, Texas Commissioner of Agriculture Sid Miller reaffirmed Texas' strong friendship and alliance with the State of Israel during the American Water Summit in Houston.

Miller, the State's most vocal defender of the Jewish State, sent a message to a large number of attendees from both the United States and Israel that Texas is, and will continue to be, the number one friend and ally of Israel.

Miller, who was attending the Tri-National Agriculture Accord in Winnipeg, Manitoba, sent Assistant Agriculture Commissioner Walt Roberts to deliver his remarks and thank MEKOROT, the event sponsors, for holding their function in the Lone Star State. Roberts said that Texas and Israel share much more than just a single star on their flag. "We have strong, independent citizens who love freedom, love their country, and love God," Roberts said.

Miller, who created the Texas-Israel Exchange Council early in his first term in office, led a significant trade delegation from Texas to Israel in 2017, which resulted in many new business opportunities for both states.

Roberts said that Miller was the first Texas elected official to ever be recognized by the Israeli Knesset and the first U.S. official ever to sign a trade agreement with Judea and Samaria, a region Miller calls the "biblically ordained heartland of the Jewish State." That trade mission resulted in new jobs in Texas, including a state-of-the-art deadstock management machine unit by AgriTech that is becoming a poultry industry standard.

"Even the routine disposal of dead chickens contaminate's the soil pollutes air and water, which has harmful effects on both human and animal health," said Roberts

He added, "Technology like this is a gamechanger. Cleaner farms, healthier animals, better environment all around. This is the kind of product that gets mass adopted - fast."

Roberts' said that Commissioner Miller wanted him to let those attending know that while some in the United States are hostile to Israel, as long as he remained in office, the State of Texas would never be on that list.

"The bonds between Texas and Israel will never be severed because those bonds are forged by a higher authority than any governmental entity; God created them," Roberts said.

Hillel Schuster, a Partner with KPMG, who attended the event, thanked Roberts for his support and asked him to let Commissioner Miller know that the people of Israel appreciated his continued support. "I have traveled the world," Schuster said, "but I have rarely found anyone who loves and supports Israel more than Commissioner Miller."