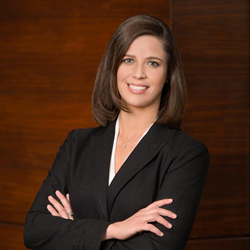 I was thrilled that we could rehabilitate the client and get the termination dismissed. At the conclusion of trial, the Department could not prove that termination was in the best interest of the child.

Clark defended a mother involved in a CPS case seeking termination of her parental rights. According to court documents, the case (Case No. 2017-05003, filed in the 310th Judicial Family District Court of Harris County) stems from the Department of Family and Protective Services (DFPS) removing the child from the mother’s care and placing her in a foster home.

Court documents further state that the mother was going to lose her child, who would then have to be adopted by her foster family, because of alleged drug abuse. The child, now 3, was then just 14 months old. Clark claims her client never even took the drugs she was alleged to have consumed, and that they had been planted on her.

“I was thrilled that we could rehabilitate the client and get the termination dismissed. At the conclusion of trial, the Department could not prove that termination was in the best interest of the child,” said Clark, founder of Meredith Clark Law. “Furthermore, through this process we were able to help the client finish high school, and now she is working on going to college to obtain a nursing degree.”

In and out of court, Clark is a diligent advocate of families and children in need. She is a proud supporter of Court Appointed Special Advocates (CASA). The altruistic organization supports and promotes court-appointed volunteer advocacy so every child who has experienced abuse or neglect can be safe, have a permanent home and have the opportunity to thrive. To donate to CASA, please visit https://give.casaforchildren.org/give/207486/#!/donation/checkout. Donations help train and support volunteers to advocate for the best interests of children who have experienced abuse or neglect.

Currently, Clark is hosting a donation drive for CASA’s Rachel & Gilbert's Closet. Gilbert and Rachel were the first children served by Child Advocates, which mobilizes court-appointed volunteers to break the vicious cycle of child abuse. Child Advocates speaks up for abused children who are lost in the system and guides them into safe environments where they can thrive. You can make a direct impact on the life of an abused child by donating new toys and children’s clothing (covering sizes from birth to 18-years-old) to keep the closet stocked.

Donations for Rachel & Gilbert’s Closet can be made at the office of Meredith Clark Law, 4314 Yoakum Blvd., Suite 6, Houston, TX 77006. The wish list includes, for all ages, winter jackets and books. For babies, new clothes (all sizes), onesies, winter clothing, sleep sets, diapers and strollers. For younger children Marvel and DC Comics toys, action figures and games, and board games. For teenagers gift cards in the amount of $25 to Old Navy, Target, Academy, Game Stop, Apple or Best Buy, sports gear/jersey from local teams, skateboards/helmets, makeup kits, and journals.