The Alfalfa Project, a California Based Water Conservation Project, Targets Water Savings of Over 300 Billion Gallons of Water Annually

A history of drought refugees in America. 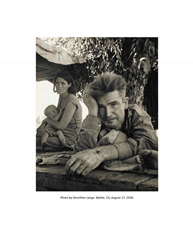 “When the well is dry, we know the worth of water.” —Benjamin Franklin

It was 83 years ago this week, when 23 car and truck-loads of migrant families were reported to have crossed the California-Arizona border in a single day. They were among tens of thousands of poverty-stricken families who found themselves without water in 1936, as drought and erosion in the Southern Plains swept through about 100 million acres of U.S. farmland. From Texas to Nebraska, the high winds and choking dust of America’s infamous Dust Bowl swept the region, killing people, livestock, and local economies. Famed American photographer Dorothea Lange, working with the U.S. Farm Security Administration, documented these drought refugees who, like thousands of others, were camping by the roadside on the way to California’s cotton fields, desperate to find work, shelter, food and water.(1)

What caused the conditions that led to America’s Dust Bowl disaster? The synthesis of massive expansion of the Western U.S, intensive crop cultivation to satisfy rising demand for wheat during World War I, and a basic misunderstanding of ecology conspired to rid the prairies of their native grassland. With the onset of drought, thirsty crops withered away, exposing naked, over-plowed farmland. Eroding soil led to massive dust storms and economic devastation.(2)

Could such devastating drought conditions occur again in America’s farmlands? In California, the four-year period between 2011 and 2015 was the driest since record keeping began in 1895, and high temperatures added to the impact, with 2014 and 2015 being the two hottest years in the state’s recorded history.(3)

Of the 70 percent of the earth that is water, less than 3 percent is freshwater, in the form of glaciers, snow, groundwater, lakes and rivers.(4) And while the amount of fresh water on the planet remains fairly constant over time(5), earth’s population continues to grow—2019’s population exploded to 7.7 billion.(6) How these billions of people use the relatively constant amount of freshwater is the result of complex environmental, geographic, political, economic and social forces.

Water is a requisite for survival, whether directly or indirectly consumed. Direct uses include drinking, cleaning, bathing, cooking and gardening. Indirect uses are less often considered, but are no less critical, as they include activities that consume water to produce food, clothing, energy or products that often include embedded water and are then transported to us.

Water efficiency is a valuable strategy for preserving supply, both by individuals and industry. Conserving water use voluntarily, recycling water, consuming fewer manufactured goods made with water, and purchasing from companies who are committed to using less water in their operations are all worthwhile. But much more than personal conservation is needed to make an appreciable difference in the planet’s overall freshwater supply.

In California, 66% of freshwater is used for irrigation, primarily in growing food crops.(7) Growing food more efficiently typically involves both a technological and a procedural/process change. One clear example of this is The Alfalfa Project, which uses subsurface drip irrigation (technology) and precision crop management techniques (procedural/process change) to dramatically reduce irrigation water consumption by 47%, while increasing crop yields by 77%.

Physically saving water takes time, money and a cultural change of habits. If the ultimate goal is to make more freshwater available to 7.7 billion people, one way to counterbalance the water physically used in one location is to purchase water that’s been saved in another location—in the form of verified Water Offsets.

In concept, a water offset is analogous to a carbon offset. Currently available water offsets represent water saved(8), water restoration(9) or water quality trading(10)—these are all market-based approaches to achieving stated goals. The Alfalfa Project (TAP) is a “water saved” model; over the past 4 years the project has saved over 4 billion gallons of water in the San Joaquin Valley of California, where alfalfa is grown. Since alfalfa is a feedstock for the dairy industry, the water embedded in products made from TAP’s supply chain is also reduced, compared to traditional sources. Both the water saved in crop irrigation and the embedded water in products that use it make more water available to our planet’s 7.7 billion people.

Businesses and retailers are beginning to put water conservation programs in place, or to recycle water, which reduces their overall water usage. The net amount of water remaining can be completely counterbalanced through the purchase of verified Water Offsets. Purchasing Offsets from TAP pays the farmer for the water saved, while providing farmers capital to install more efficient water systems, and thus making more freshwater available to the planet’s growing population. This reduces the impact of a business’ operations on the local community and the locations where their products are consumed.

Changing global climate patterns are increasing the frequency of drought and floods. Groundwater sources are being depleted, and pollution is decreasing the quality and amount of freshwater available for human consumption. Verified Water Offsets enable businesses and individuals to control their impact on the current freshwater supply and to compensate others for saving water on their behalf.

About TAP
The Alfalfa Project (TAP) was created with the audacious goal to convert 235,000 acres of alfalfa in California’s San Joaquin Valley from traditional flood or sprinkler irrigation to efficient subsurface drip irrigation (SDI), and from conventional farming practices to precision farming practices. Upon completion the project is expected to save over 300 billion gallons of water annually and have substantial impact to the economy in the area, create jobs, sequester carbon in the roots of the plant, and reduce the amount of water pumped from some of the most critically over-drafted groundwater areas in California.