With its efficient plug-in hybrid system, the RAV4 Prime is an excellent choice for eco-minded SUV shoppers. 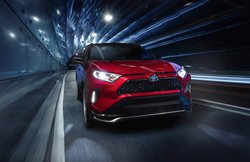 SUV shoppers can soon get the all-new 2021 Toyota RAV4 Prime at Toyota Vacaville, which is located at 500 Orange Drive in Vacaville.

The Toyota RAV4 helped pioneer the compact SUV segment when it debuted back in 1994. Years later, the RAV4 is still leading the way with the introduction of the all-new 2021 Toyota RAV4 Prime. With its innovative plug-in hybrid system, the RAV4 Prime delivers an impressive balance of efficiency and performance. On top of that, the RAV4 Prime boasts off-road capabilities, high-level safety, a stylish exterior design, a comfortable and technologically sophisticated cabin, and a wealth of premium features. Prospective buyers of 2021 RAV4 Prime in Solano County won’t have to wait much longer to get behind the wheel of the all-new SUV, for it will soon arrive at Toyota Vacaville.

The 2021 RAV4 Prime is a very efficient SUV. Its state-of-the-art plug-in hybrid system combines two electric motors with a 2.5-liter four-cylinder engine, delivering an estimated hybrid system efficiency rating of 38 combined MPG and an estimated electric-only efficiency rating of 94 combined MPGe. The RAV4 Prime can run on electric-only power for an estimated 42 miles. This is the highest electric range for the plug-in hybrid SUV segment.

The RAV4 Prime more than holds its own on the performance front. Its plug-in hybrid system generates a total system output of 302 horsepower. The RAV4 Prime achieve the zero to 60 mph sprint in only 5.7 seconds. The only production Toyota model that has a better acceleration time is the GR Supra sports car. With its Electronic On-Demand All-Wheel Drive system, the RAV4 Prime provides excellent traction when encountering uneven and slippery surfaces.

For more information about the 2021 Toyota RAV4 Prime at Toyota Vacaville, automotive customers can visit the dealership’s website at http://www.toyotavacaville.com or call (707) 446-7000.

The address of Toyota Vacaville is 500 Orange Drive in Vacaville.