From Biomarkers to the Microbiome, Some of the Smartest Parkinson’s Research to be Funded in 2018-2019 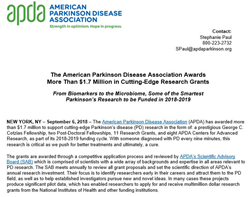 The work being done as a result of the grants in this new funding cycle will have an incredible impact on the world of PD. -- Leslie A. Chambers, President & CEO of APDA

The American Parkinson Disease Association (APDA) has awarded more than $1.7 million to support cutting-edge Parkinson’s disease (PD) research in the form of: a prestigious George C. Cotzias Fellowship, two Post-Doctoral Fellowships, 11 Research Grants, and eight APDA Centers for Advanced Research, as part of its 2018-2019 funding cycle. With someone diagnosed with PD every nine minutes, this research is critical as we push for better treatments and ultimately, a cure.

The grants are awarded through a competitive application process and reviewed by APDA’s Scientific Advisory Board (SAB) which is comprised of scientists with a wide array of backgrounds and expertise in all areas relevant to PD research. The SAB meets annually to review all grant proposals and set the scientific direction of APDA’s annual research investment. Their focus is to identify researchers early in their careers and attract them to the PD field, as well as to help established investigators pursue new and novel ideas. In many cases these projects produce significant pilot data, which has enabled researchers to apply for and receive multimillion dollar research grants from the National Institutes of Health and other funding institutions.

“It is vital to accelerate research and support translational ideas that can lead to new treatments for those people living with PD,” commented David G. Standaert, MD, PhD, John N. Whitaker Professor, Chair of Neurology at the University of Alabama at Birmingham, School of Medicine and Chairman of the SAB. “APDA’s SAB is focused on investing in the best science to support that important mission.”

“APDA is funding an exciting array of projects this year”, said Rebecca Gilbert, MD, PhD, Vice President and Chief Scientific Officer, APDA. “Our funding support will help investigate new biomarkers of Parkinson’s disease, examine the scientific basis for gender differences in PD, and probe the differences in PD among people of varying ethnicities, among many other worthy projects that will have an impact on the future of PD research”.

The George C. Cotzias Fellowship is awarded to a young physician-scientist with exceptional promise. The award spans three years and is designed to fund a long-range project focused on PD. This year’s awardee is:

Post-Doctoral Fellowships are awarded to support post-doctoral scientists whose research holds promise to provide new insights into the pathophysiology, etiology and treatment of PD. This year’s awardees are:

Research Grants are awarded to investigators performing innovative PD research at major academic institutions across the United States. This year’s awardees and their areas of study are as follows:

APDA Centers for Advanced Research support large PD research programs which include research trainees, fellowship programs, early-stage discovery programs and later-stage clinical translation. These Centers facilitate research which is at the forefront of investigation into the cause, treatment and ultimately cure for PD. This year, two new Centers were chosen through a competitive application process. The current APDA Centers for Advanced Research are:

Learn more about these grantees and the exciting work they are doing and browse all APDA-funded research by visiting https://www.apdaparkinson.org/research/what-we-fund/.

“The work being done as a result of the grants in this new funding cycle will have an incredible impact on the world of PD,” stated Leslie A. Chambers, President & CEO of APDA. “This work is only possible because of the steadfast support of our generous APDA donors.”

Researchers and physicians who are interested in applying for APDA funding can visit for details on the 2019-2020 funding opportunities.

The American Parkinson Disease Association (APDA) is the largest grassroots network dedicated to fighting Parkinson’s disease (PD) and works tirelessly to assist the more than 1 million Americans with PD live life to the fullest in the face of this chronic, neurological disorder. Founded in 1961, APDA has raised and invested more than $177 million to provide outstanding patient services and educational programs, elevate public awareness about the disease, and support research designed to unlock the mysteries of PD and ultimately put an end to this disease. To join us in the fight against Parkinson’s disease and to learn more about the support APDA provides nationally through our network of Chapters and Information & Referral (I&R) Centers, as well as our national Research Program and Centers for Advanced Research, please visit us at http://www.apdaparkinson.org.