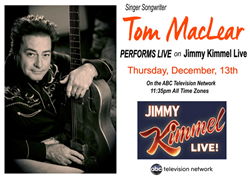 ““…Material is not a problem here. Tom has performed and written hit songs for some of the best! His unique style, especially his slide guitar, has earned him much respect in the music industry, glad I found him…” ...2008 ‘the late great’ Don Kirshner Publisher, Producer, Radio and TV Host. ”

TOM MACLEAR will be sitting in as the night's 'Guest Artist' with Jimmy Kimmel's extraordinary house band Cleto & The Cletones, playing selections from his latest CD 'GODS & GHOSTS' including some special songs from the past.

An Award Winning Songmaster TOM MACLEAR has been releasing New Nashville and Americana/Country singles under his own name on Indie Radio Stations Nationwide and in Europe over the last 10 years. TOM MACLEAR has also contributed Film & Television Music most notably for FORREST WHITAKER'S 'SONGS MY BROTHER TAUGHT ME.'

Tom MacLear's New Book Availalbe at Barnes & NobleInside A String: INSIDE A STRING: A collection of poems, essays, lyrics and prose by songwriter/author; Thomas MacLear. One artists psyche of America through his 40 years on the road in rock & roll.