The Best Places to Live and Work Abroad in 2021—InternationalLiving.com

While just about every country is willing to provide a tourist visa that lets visitors hang around for a few months, most will not grant permission to live and work within their borders without a job offer from a local employer. Some offer long-term residence visas that let expats legally live in the country, but they don’t typically allow for work. A new report from the editors at InternationalLiving.com highlights four countries where it’s possible to find easy access to a residence visa—and the permits that allow for work as well. 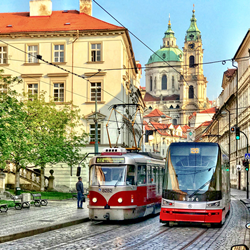 It’s clear that an increasing number of Americans want a different life and are looking for countries where they can live and work legally.

It’s clear that an increasing number of Americans want a different life and are looking for countries where they can live and work legally. But the options are limited without a local employer willing to provide a job.

Expats able to earn from anywhere do have a few good options, however, according to International Living’s report. While a small collection of countries welcomes outsiders who can qualify for the necessary visas, four in Latin America and Europe stand out as the best options in terms of cost, ease, and timing.

If your goal is to live and work remotely overseas, but remain close to U.S. borders, Panama is your best bet. Direct flights land in Panama City from at least nine U.S. cities and take between three and seven hours, depending on where you’re coming from.

Beyond proximity, Panama offers what it calls the Panama Friendly Nations Visa, a special program whereby nationals of certain countries (including the U.S. and Canada) can apply for permanent residence, which comes with a Panamanian cédula, the local ID card. That cédula is permanent, allowing holders to come and go as they please, as would a born-and-bred Panamanian. Separately, the program also allows holders to request a work permit through the Ministry of Labor, though that’s part of a different process.

Obtaining a temporary cédula takes about eight days. It will take another two days to obtain a multiple-entry visa that’s necessary so an individual can come and go as they wait out the roughly five-month process for the government to issue a permanent cédula. Once a cédula has been obtained, a person can then apply for a work permit from the Ministry of Labor, which will take about a month.

To start the cédula process, you’ll need basic documents—passport, proof from the FBI that there is no criminal record—and $5,000 in a Panamanian bank account, plus $2,000 for each dependent. And to obtain a work permit, then you’ll need to set up a Panamanian corporation (which can be disbanded after a year).

If speed is more important, then Uruguay is a great choice. Here, expats can land at the airport with the correct collection of documents, and if they already have a pre-scheduled filing date with the immigration office that day, they can file their paperwork and have a temporary cédula that afternoon or the next day. All that’s required is a birth certificate and an apostilled police record (meaning it has been authenticated and is acceptable across international borders). They will also need to show that they have the financial means to support themselves with a provable stream of income from anywhere in the world.

With a temporary cédula, they will also have immediate access to the state healthcare system, or they can immediately buy access with a local, private healthcare plan, which will cost about $70 to $350 a month, depending on the bell and whistles they want.

To manage the process themselves, expect to pay about $600 to $700. But they will also need to have a proficient level of Spanish, as none of the paperwork is in English. Otherwise, hire an attorney. It will be quicker and more efficient and will cost between $1,000 and $2,000.

Portugal has two visas that would apply to someone wanting to live and work on the Iberian Peninsula: D2 and D7. Technically, the D2 is for independent workers and entrepreneurs, while the D7 is for those who are retired or earning passive income. In practical terms, the D7 will make sense for most people, even if they’re not retired, because it’s based on income. The D2 requires proof that an expat can support themselves as a freelancer, and can begin issuing Portuguese invoices on which the business will be taxed, though the tax rate is fixed at 20% for 10 years.

To apply for either a D2 or D7 visa, an expat must enroll in the Portuguese tax system and become a tax resident. That requires obtaining a Portuguese tax number before they can even apply for a visa. And for that, they will need a sponsor, which can be a law office, accounting office, or migration office.

As a freelancer, an expat will also want to apply for Non-Habitual Resident status, or NHR, which is issued to people who’ve never lived in Portugal before and move to the country. With NHR status, income earned outside the country is exempt from taxes. They will have to file a Portuguese tax return and declare the income, though they’ll owe no taxes on it. The other benefit of this is that it shows Uncle Sam they’re a tax resident of another country, which then helps trigger their eligibility for the Foreign Earned Income Exclusion.

A person is eligible to apply for Portuguese citizenship and a passport after five years of residence, though they have to demonstrate sufficient knowledge of the Portuguese language.

It’s a two-step process in Czech Republic. First step: apply to join the živnostensky (zivno) list. This isn’t specifically for foreigners. It’s a trade license for any Czech resident who works independently, be that a plumber, masseuse, artist, or whoever. That will take a week at most. Zivno in hand, they can then apply for a one-year, temporary residence visa.

They must apply for a residence visa at a Czech embassy outside of the Czech Republic, show they have housing (a notarized lease agreement) for the full-length of the visa they seek, up to one year. That means they’ll need to visit the Czech Republic to arrange that. Some expats will move to Prague, obtain their housing and zivno, then take the train to nearby embassies in Berlin, Vienna, or Bratislava and complete their application.

They will need a signed letter from their bank stating that they have the equivalent of 125,000 Czech crowns on deposit (about $5,700). That will need to be translated into Czech, which a visa agency can handle. Be sure the account has a debit card, which must be presented at the application meeting at the Czech embassy, because officials will want to see it—it’s proof that a person can access the account.

An FBI criminal background check is required, though as an American an expat can also go to the U.S. embassy in Prague and sign an affidavit attesting to their criminal-free background. Along with a passport and an application form, that’s pretty much all the documents an applicant needs.

Once the temporary visa expires after a year, it can easily be traded in for a renewable, two-year long-term residence visa. After five years as a legal resident, a person is eligible to apply for Czech citizenship and a Czech passport, which like the Portuguese passport, is an EU passport and thus gives them free rein to live and work anywhere in the EU.

International Living has launched its new “Work From Anywhere” resource, devoted to coverage of innovative money-making strategies, ways to build a portable income, tips for boosting health and well-being, methods to maximize Social Security, and so much more. More information can be found, here.