The PenCraft Awards' committee was proud to announce that The Body On the Roof by Kevin Creager won its literary excellence award in the mystery genre category for the year 2019. The award was presented at the Golden Nugget Hotel and Casino, in Lake Charles, Louisiana. 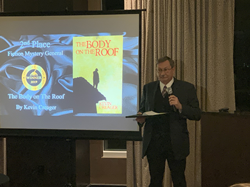 Kevin Creager at the PenCraft Awards

It is exciting and an honor to meet these talented and creative authors at our annual awards ceremony.

Kevin Creager, of Springfield, Ohio, recently received the prestigious Pencraft Award of Literary Excellence (Second Place, Mysteries) for his mystery about the perplexing death of a teacher found dead on her roof. The Body On the Roof, published through Black Rose Writing, takes place in the small town of Summerfield, Ohio, and tells the story of the investigation by the local police department into the discovery of the retired teacher’s body on the roof of her house. The novel has been described as “Agatha Christie meets Mayberry”. The Body on the Roof is a farcical story told with such a deft hand that it keeps you guessing right to the very end, and all the while keeping you very entertained during the bewildering investigation for the wrongdoers.

The award was presented by David Hearne, the editorial director of the PenCraft Awards during its Dinner and Ceremony on January 20, 2020, at the Golden Nugget Hotel and Casino, in Lake Charles, Louisiana.

The winning author, Kevin Creager, is a recently retired school psychologist, having worked for 41 years in Springfield City Schools and for the Clark County Educational Service Center. His previous book, We Cuss a Little: The Life and Times of a School Psychologist, was named one of the 9 Essential Books For the School Psychologist’s Bookshelf by Therapy Source in 2017.

"It is exciting and an honor to meet these talented and creative authors at our annual awards ceremony," stated David Hearne..

The Body On the Roof is available through Amazon, Books A Million and Barnes and Noble Bookstores.