The Book “Plagues, Pandemics and Viruses,” Due Nov. 1, Charts Likely Course COVID Might Take Based on Thousands of Years of Pandemic History

Dr. Anthony Fauci Told “Plagues” Author Heather Quinlan That If a Vaccine Is Too Rushed, COVID Could Become an Even More Dangerous Virus 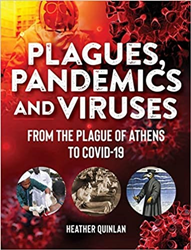 When Heather Quinlan was hired by Visible Ink Press in 2018 to write a book on pandemics and how they changed the course of human history—including the beginning of the Renaissance and the start of the middle class--she could not have predicted the imminent rise of COVID.

Fast forward to the beginning of 2020, and just as Quinlan was almost finished with her manuscript, her ongoing research introduced her to the novel coronavirus in its infancy.

“It went from murmurs that a SARS-like virus had emerged, to hospitals being built in China within days, to all of a sudden Tom Hanks had it, and then the NBA and NHL talked about canceling their seasons. It was quick and it was terrifying.”

Needless to say, in light of these shattering developments, Quinlan’s deadline was extended.

Quinlan says the prospect of writing about COVID was doubly daunting because, “The information was changing daily, and it was difficult to maintain a journalistic distance while being frightened about what might happen around the world and at home.”

In the midst of the COVID crisis, Quinlan interviewed Dr. Anthony Fauci, the physician most often on the front lines of pandemic research. Fauci told Quinlan, "Here we are in 2020 in the middle of what's going to turn out to be an historic pandemic.” When asked if rushing a vaccine may result in an even more dangerous version of COVID, Fauci answered with an emphatic “Yes.” Because the FDA is now insisting on stricter guidelines for COVID vaccine developers, Fauci’s take was particularly prescient.

The COVID threat affected Quinlan’s personal life as well. She and her husband became one of the first U.S. couples to be married via Zoom instead of in front of their family and friends.

In addition to COVID, “Plagues, Pandemics, and Viruses: From The Plague of Athens to COVID-19” tracks illnesses that have bedeviled humankind from ancient times to the present day.

Topics include:
WHERE WE ARE PROBABLY HEADED:

ABOUT Author Heather Quinlan:
Heather Quinlan got her start in publishing at Discovery Channel Books, then as an Acquisitions Editor for Sterling Publishing. Quinlan is also a filmmaker, whose documentary on the New York accent, “If These Knishes Could Talk,” screened at the Library of Congress and at film festivals around the world.