The Busker, a Contemporary, Adventurous and Bold Irish Whiskey Launches in the U.S. Market 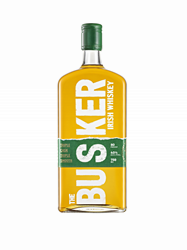 The Busker is proud to announce the launch of their “new to world” innovative Irish Whiskey in the U.S. market. The Busker is born out of a modern Ireland, where the contemporary and bold meet at the crossroads of tradition. Disrupting the Irish Whiskey landscape, The Busker is a revamped and adventurous look into the category.

The Busker includes all four types of Irish whiskeys (Single Grain, Single Pot Still, Single Malt and Blend). The Busker Blend - Triple Cask Triple Smooth - combines the Single Grain with a high percentage of the Single Malt and Single Pot whiskeys. Matured and finished in three different casks (Bourbon, Sherry, Marsala), this whiskey brings a new meaning of smoothness in the Irish Whiskey. The Busker Single Collection, represented by the three traditional Irish Whiskeys (Single Grain, Single Pot Still and Single Malt), is produced under one roof at the world-class Royal Oak Distillery. The Distillery is proudly located on an 18th century estate in the Ancient East region at County Carlow. Each whiskey boasts an unmistakable taste profile, with nuances ranging from vanilla and oak, to rich spicy notes.

User-friendly and easy to hold, the bottles packaging showcases a simple, sleek screen print design. The aesthetically ripped label elicits a boldness and ruggedness intriguing to all whiskey drinkers.

“We aim to disrupt the Irish Whiskey category by attracting new and authenticity-seeking consumers to the brand”, says Ray Stoughton, Executive Vice President of Disaronno International LLC, The Busker’s parent company. “While we honor the rich Irish heritage and whiskey-making traditions to produce superb liquid, we go beyond the limitations and lines of history to create our own story. The American consumers are thirsty for something that’s exciting and innovative, and The Busker delivers just that.”

The Busker sides with innovation way beyond its production process; it reimagines a new generation of American whiskey drinkers. The Busker blend suggested retail price is $24.99 and for Single Grain, Single Malt and Single Pot Still is $29.99 to enjoy the full Irish Whiskey experience. The Busker will be available nationwide.

About The Busker
The Busker is a “new to world” Irish Whiskey that is born out of a modern Ireland, where the contemporary and bold meet at the crossroads of tradition. The Busker collection includes all four types of Irish whiskeys (Single Grain, Single Pot Still, Single Malt and Blend). The Busker is produced at the Royal Oak Distillery, in County Carlow Ireland, located on an 18th century estate in Ireland's Ancient East region. The Royal Oak Distillery is the only distillery in Ireland which offers to a unique Brand all three classic Irish styles of whiskey - Single Grain, Single Malt & Single Pot Still. The Busker uses different casks during the maturation process of their whiskeys including Bourbon casks, Sherry casks, and Marsala casks.