The documentary "Skin Deep: The Battle Over Morgellons" will be a game-changer for all patients around the world that are suffering from this disease. It delves into the scientific realities, the quest for recognition and the suffering of Morgellons patients. 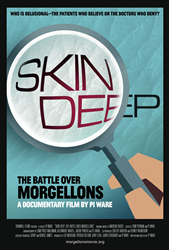 Adds Ware, "There exists a period of time when the victims of a disease are ‘blamed' for their disease, and the resulting shame, confusion and anger doubles their suffering. Morgellons patients are living in that time right now.”

The documentary Skin Deep: The Battle Over Morgellons will celebrate its World Premiere on October 5th at the Awareness Film Festival in Los Angeles. Skin Deep was directed by Emmy-winning editor and filmmaker Pi Ware. The film investigates the fierce controversy surrounding the disease known as Morgellons.

Morgellons disease symptoms include fatigue, slow-healing lesions, GI disturbances, and—most notably —fibers growing from patients' skin. Morgellons became controversial when a large portion of the medical industry declared those symptoms to be nothing more than products of delusional minds. Joni Mitchell may be the most famous of the victims of Morgellons disease, but there are tens of thousands of people who currently suffer. Multiple studies put the estimate at 18,000 new cases a year.

Recent peer-reviewed scientific evidence that links Morgellons to Lyme disease has proven that the source of the suffering is biological--likely a bacteria named borrelia--suggesting that there may be another delusion at play here: the denial of the science, symptoms and suffering of Morgellons patients.

Skin Deep began filming in the spring of 2015. The film follows several Morgellons patients and physicians who treat them—using antibiotics or anti-psychotics depending on the doctor’s belief system. The film focuses on the battle between a nurse (Cindy Casey-Holman) who is convinced she has a biologically-based disease and a skeptical dermatologist (Dr. Steven Feldman) who favors psychiatric diagnoses. The film climaxes in a showdown at the Morgellons Conference in Austin, Texas, where bridges between doctors and patients will either be built... or burned.

While Skin Deep: The Battle Over Morgellons gives voice to both sides of the debate, the film focuses on the new science and the need for empathy for those patients mercilessly caught between doubt and a lengthy scientific process. Says director Pi Ware, “With many new diseases, there is a period of time before the science of the disease is widely accepted, a time when doctors say, ‘What you're suggesting goes against what I learned in medical school,’ a time when patients are vulnerable to the prejudice and arrogance of otherwise well-meaning physicians.” Medical history is filled with similar examples: from ulcers (once believed to be caused by stress, now proven to be caused by bacteria) to Multiple Sclerosis (often blamed on "hysteria" until CAT scans were invented) to lupus (over 50% of all lupus patients have been told their symptoms are "all in their head”). Adds Ware, "There exists a period of time when the victims of a disease are ‘blamed' for their disease, and the resulting shame, confusion and anger doubles their suffering. Morgellons patients are living in that time right now.”

View the Trailer for the film at morgellonsmovie.org.