The much loved children's cartoon characters from Nickelodeon's PAW Patrol bring their acts of heroism and critical thinking to families at the world's largest children's museum in a first-ever interactive exhibit about Marshall, Chase, Skye and more. 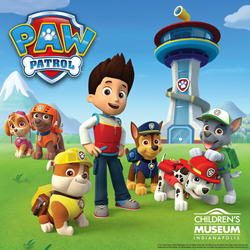 It is exciting to be the first museum to bring the rescue team of pups to Central Indiana followed by a national tour so they can continue to set a strong example of the importance of nurturing friendships and caring for our community and the world around us.

The Children’s Museum of Indianapolis partners with Nickelodeon® to create the first-ever interactive exhibit featuring the adorable puppy heroes of PAW Patrol. Based on Nickelodeon’s top-rated animated preschool series PAW Patrol—which is produced by Spin Master Entertainment— the new exhibit opens February 23, 2019, and will give families and children the opportunity to travel alongside Marshall, Chase, Skye, Rocky, Rubble, Everest, Zuma, and Tracker as the PAW Patrol overcomes obstacles to helps others.

In different exhibit areas including Adventure Bay, Jake’s Mountain, and the jungle, youngsters will team up to overcome challenges, take heroic action, and help others. During the ruff, ruff rescues, visitors will participate in pretend play and hands-on interactives that encourage self-confidence, critical thinking and problem-solving.

Similar to Nickelodeon’s previous successful partnerships with The Children’s Museum, Teenage Mutant Ninja Turtles™: Secrets of the Sewer, and Dora and Diego – Let’s Explore!, the PAW Patrol exhibit will travel to other children’s museums and venues across North America for five years following the Indianapolis debut.

“We are thrilled to have the opportunity to partner with Nickelodeon for a third exhibit,” said Dr. Jeffrey H. Patchen, president and CEO, The Children’s Museum. “It is exciting to be the first museum to bring the rescue team of pups to Central Indiana followed by a national tour so they can continue to set a strong example of the importance of nurturing friendships and caring for our community and the world around us.”

“PAW Patrol continues to delight fans as the top preschool series across all TV and is the perfect property to expand our location based experierence offerings, allowing kids and families to go on thrilling and immersive adventures with the Nickelodeon characters they love,” said Gerald Raines, Senior Vice President, Global Location Based Experiences, Nickelodeon.

Currently in its fifth season, PAW Patrol, produced by Spin Master Entertainment, follows a pack of heroic rescue pups– Chase, Marshall, Rubble, Skye, Rocky, Zuma, Everest and Tracker –who are led by a tech-savvy boy named Ryder. Together, they work hard to show the people of Adventure Bay that “no job is too big, no pup is too small!” The series features a curriculum that focuses on citizenship, social skills and problem-solving.

About Nickelodeon
Nickelodeon, now in its 39th year, is the number-one entertainment brand for kids. It has built a diverse, global business by putting kids first in everything it does. The company includes television programming and production in the United States and around the world, plus consumer products, digital, recreation, books and feature films. Nickelodeon’s U.S. television network is seen in more than 90 million households and has been the number-one-rated kids’ basic cable network for 22 consecutive years. For more information or artwork, visit http://www.nickpress.com. Nickelodeon and all related titles, characters and logos are trademarks of Viacom Inc. (NASDAQ: VIA, VIAB).

About The Children’s Museum of Indianapolis
The Children’s Museum of Indianapolis is a nonprofit institution committed to creating extraordinary family learning experiences across the arts, sciences, and humanities that have the power to transform the lives of children and families. For more information about the tourist attraction and museum, please visit http://www.childrensmuseum.org, follow us on Twitter @TCMIndy, Facebook.com/childrensmuseum and YouTube.com/IndyTCM.