Ordinance Banning ALL Short-Term Rentals within the City Limits; A Move Violating The Rights of Property Owners; Forcing Many to Lose Their Homes; Leaving Behind The City They Once Called Home: 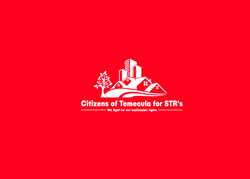 The Citizens of Temecula for STR’s, are against the “blanket-ban” and in an effort to be heard retained the legal counsel of Daniel Wildish and Charles Smith of Bohm, Wildish & Matsen, LLP, Costa Mesa, CA to spearhead their battle.

Alexandria de Rossi, suggests that the “blanket ban” does not present a successful analytic formulation of private property rights resulting in an explanation of the method of directing and coordinating uses of economic resources in a private property system (i.e., a capitalistic or “free-enterprise” system). “People must have secure, alienable private property rights. It is a lawful and dutiful act. We have individuals that rely on income derived from renting out a room or their entire home. Some are handicapped while others are retired Veterans and Single-Parents. Whatever their circumstance, no one should have the legal right to take away one’s rights as a property owner.”

The Citizens of Temecula for STR’s is purposing regulations similar to that of Riverside County. In addition, they are suggesting the implementation of a Permit Process, Quiet Hours (9:45pm-7:00am), a Decibel Monitoring system (NoiseAware), Security Systems, a 3-Strike System, a 24-Hour Hotline, 12% TOT with 10% to the City of Temecula and 2% to the Temecula Valley Convention & Visitors Bureau and more. (See Media)

The Citizens of Temecula for STR’s filed a Petition for Writ of Mandate and Complaint for Inverse Condemnation with the courts in Murrieta, (Southwest Justice Center) on March 18, 2020. The City of Temecula has officially been served via the law firm, Richards Watson Gershon in Los Angeles, CA.