With a New World-Class Playing Surface, the College of New Jersey is Ready to Add to Their Long-List of Championships 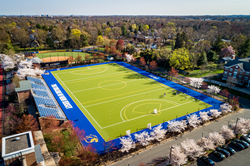 Aside from being beautiful, it provides not only the proper but also a state-of-the-art playing surface that we were aiming for.

The College of New Jersey (TCNJ) Lacrosse and Field Hockey teams are now playing on one of the most advanced field hockey surfaces in the world. Manufactured by AstroTurf®, the leading innovator in synthetic turf products, Poligras Platinum is a high-tech, tufted system designed to provide optimum ball surface interaction and deliver a consistent playing experience for today’s athletes. After training and competing on the field at Lions Stadium, which is the home field for the school’s soccer and football teams, the Lacrosse and Field Hockey programs are looking forward to taking their game up a notch with their own dedicated playing surface.

“We are thrilled with how the new turf at our Field Hockey & Lacrosse facility turned out’” said Executive Director of Athletics Amanda DeMartino. “Aside from being beautiful, it provides not only the proper but also a state-of-the-art playing surface that we were aiming for. We are so excited for our student-athletes to be able to utilize this surface and are extremely proud of how the project turned out.”

With a state-of-the-art field at the TCNJ Field Hockey & Lacrosse Complex, these teams will be the ones to watch in the 2021-2022 NCAA Division III playing season. The phenomenal Sharon Pfluger directs both the field hockey and lacrosse programs. She ranks among the all-time leaders in wins nationwide for both sports and has been coaching The College of New Jersey Lions for more than 35 seasons.

The Poligras Platinum system that the athletes will be playing on was used at the Olympic Games in London in 2012 and in Rio in 2016, and it’s one of AstroTurf®’s most widely-used products worldwide. Consisting of tufted polyethylene fibers, the field features a multidirectional closed surface that demonstrates unbeatable ball rolling behavior. It also comes with a high stitch density, which creates a much more compact appearance than other modern field hockey systems.

“We are already receiving great feedback on the performance of the field and how much athletes are enjoying the new facility,” said Melissa Twist, AstroTurf’s National Manager of Field Hockey Fields. “TCNJ has always had an exceptional field hockey program. This field is well deserved by the program’s winning history, and I’m excited to see the impact it has.”

The procurement of the new field was made possible by AstroTurf®’s association with Sourcewell, a self-sustaining government agency enabled by state statute to serve its public-sector members. AstroTurf® completed an end-to-end upgrade for TCNJ, installing a ball stopper and netting system with 40-foot high poles, as well as a new wireless Daktronics scoreboard using Playing Surface as their subcontractor.

The new field was installed over a base layer and a 26-millimeter elastic layer (E-layer), done by ATT Sports. AstroTurf removed the old surface layer and then installed the Poligras Platinum field hockey system.

AstroTurf® has a long history of innovation and leadership in the world of field hockey. Back in 1975, it was AstroTurf ® that helped change the sport when the first International Field Hockey game was played on the company’s synthetic playing field in Montreal.

At the same time, field hockey has shaped AstroTurf®’s history. Always focused on offering athletes the best possible playing surface, it was the company’s quest to develop specialized knitting equipment and innovative manufacturing processes that have kept AstroTurf at the forefront of the industry and established its reputation as a leading provider of field hockey’s most elite surfaces.

AstroTurf® is recognized as the Official Artificial Surface Provider of both USA Field Hockey and the National Field Hockey Association and a preferred supplier for FIH. With the new field hockey field at The College of New Jersey, the company is also proud to be a part of the journey of such an incredible group of college athletes.