“A Night In Old San Antonio®” (NIOSA®) is a four-night festival, Tuesday to Friday, April 20-23, 2021 from 5:30 to 10:30 p.m. that celebrates the city’s diverse cultural legacy, traditionally held during Fiesta San Antonio®. NIOSA is the top fundraiser for historic preservation in the United States—living up to its motto as a “Celebration for Preservation.” It is solely produced by and benefits The Conservation Society of San Antonio (one of the nation’s oldest and most active historic preservation organizations). Through the magic of 139+ food, drink and atmosphere booths; continuous live musical acts; decorations; souvenirs; and thousands of volunteers, NIOSA brings the city’s heritage alive in its 14 cultural areas. 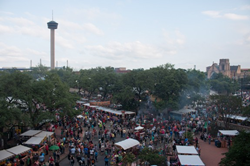 We love that NIOSA guests find different experiences in each alley, plaza and passageway as they visit our 14 themed areas—each which represent a specific sector of San Antonio’s unique history. ” — Terry Schoenert, NIOSA Chairman

Through the magic of 139+ food, drink and atmosphere booths; continuous live musical acts; decorations; souvenirs; and thousands of volunteers, NIOSA brings the city’s heritage alive in its 14 cultural areas. San Antonians have consistently voted NIOSA as their favorite event. The last time it was held, NIOSA was named the #1 Fiesta event by San Antonio Current, which called it an “essential experience.”

NIOSA occurs in the heart of downtown San Antonio on the grounds of La Villita Historic Arts Village District, with its nearly five acres of historic buildings, limestone walls and fountains.

NEW IN 2021: All attendees at NIOSA must use an electronic cashless wristband to pay for foods, drinks and souvenirs; more information coming soon on the Tickets tab of the NIOSA website.

Entrance tickets are sold in advance and at the gates; children 12 and under are free when accompanied by an adult. Check website for costs, etc.

What makes NIOSA unique from festivals around the world?

“A Night In Old San Antonio” pays homage to the city’s diverse culture with food, music and décor that transforms the village into 14 distinct areas: The Mission Trail area celebrates the early years with a colorful façade of the San Antonio Missions. Explore the amphitheater built in 1941 on the beautiful Riverwalk in the Arneson Theatre area. Find tastes from the Orient in China Town. Listen to jazz and enjoy beignets and escargot in French Quarter. The old west comes alive in Frontier Town with its famous Shypoke Eggs and country music. Sing along to an Irish folk song and drink Irish beer in Irish Flats. Tejano sounds and famous handmade Maria’s Tortillas can be found in Haymarket. Have nostalgic fun in Clown Alley. The music in Froggy Bottom rocks as you wait for the famous Chicken on a Stick. It’s always 4th of July in Main Street USA. The Mexican Market area features great music and the very popular Anticucho beef shish-ke-bob. Find sizzling sausage and a German Oompa band in Sauerkraut Bend. Sample cuisine influenced by Northern Mexico in South of the Border. Colorful Spanish murals will surround you in Villa España.

NIOSA chairman Terry Schoenert—elected by the Conservation Society in July 2019 and 2020 as its Fourth Vice President/NIOSA Chairman—volunteers her time all year to plan and coordinate the event, assisted by NIOSA vice chairs (Dee Wright, Julie Terrell, Lisa Pierce and Deborah Lund) and NIOSA Treasurer Jana Foreman—also volunteers. They oversee thousands of volunteers, including area and booth chairmen in NIOSA’s 14 areas, who then recruit volunteers who prep, cook and serve the food. Other volunteer-driven committees include the six-man staging crew, banners, cascarónes, central paper supply, decorations, appliances, consolidated food supply, maps, signs and fire safety. NIOSA’s full-time staff and its warehouse manager also contribute many volunteer hours beyond their job descriptions.

The Conservation held its first harvest festival in 1936. Until 1946 (with breaks in 1943 and 1945 because of the war), it was held in the fall—under different names and with slightly different themes and locations. In 1946, city officials asked the Society to hold its event during Fiesta. In 1948, the one-night festival was called “A Night In Old San Antonio” for the first time. By 1958 it had expanded to four nights and in 1966, the name was registered and trademarked.

The 72nd celebration of NIOSA was scheduled for April 2020, but was cancelled because of Covid-19.

In its past 10 years alone, more than $12 million has been netted at NIOSA to enable The Conservation Society to continue its 96 year mission of preserving historic buildings, objects, places and customs. The NIOSA committee presents the Conservation Society with an average of $1.6 million annually in profits to fund the Society’s preservation of historic properties and parks throughout the city and neighboring counties, as well as education and advocacy programs such as the Heritage Education tours for more than 2,500 fourth grade students annually and $2.5 million (yes $2.5 million) in building grants available to all San Antonians—and that is just a few examples.

An example of the Conservation Society’s diligence is its decades-long campaign to conserve the San Antonio’s five Franciscan Missions. Starting just two years after being formed, the Society purchased items including aqueducts, farmland to save them. In 1978, the Society was critical in the creation of the National Historical Park, and in 2006 launched the UNESCO World Heritage nomination that led to the Missions’ inscription in 2015—the only World Heritage Site in Texas.

NOTE: Event is pending due to COVID-19; check http://www.niosa.org as event nears.