The Dark Depths of Self-doubt: New study looks into the extensive and damaging effects of not trusting yourself

A recent study by PsychTests.com indicates that people who experience frequent self-doubt not only distrust their skills, they also have an extremely pessimistic attitude, struggle to express their feelings, and have a deep sense of self-loathing. 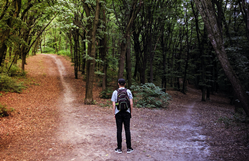 Self-doubts that go unopposed can plant themselves so firmly in a person’s mind that they become very difficult to dispute.

The qualms that arise as a result of self-doubt can become so ingrained that they become part of your personality.

It’s hard to imagine someone like Michelangelo distrusting his mad skills, even for a moment. However, the sculptor of David and the painter of the fresco in the Sistine Chapel apparently produced and then set fire to some of his creations. Leonardo da Vinci, Francis Bacon, Louise Bourgeois, and Monet also destroyed or chose to never finish certain artworks. Much like the tendrils of a vine, self-doubt can infiltrate the mind and tear apart the very foundation on which a person has built his or her accomplishments, rendering years of knowledge and practice seemingly useless. And according to research from PsychTests.com, trying to navigate the world in a cloud of self-doubt is like running through a medieval gauntlet without armor: really challenging and terribly painful.

Analyzing data collected from 12,259 people who took the Emotional Intelligence Test, PsychTests’ researchers compared people who experience frequent self-doubt (Self-doubters) to those who don’t (Self-believers). Here’s what their study revealed:

“The qualms that arise as a result of self-doubt can become so ingrained that they become part of your personality,” explains Dr. Ilona Jerabek, president of PsychTests. “For example, you might have doubts about your public speaking skills, perhaps brought on by a bout of stage fright, or a bad experience during a presentation. You start to become fearful every time you have to give a speech, and the stress may negatively affect your performance. If you allow these doubts to take hold, then you will convince yourself that you are simply not good at public speaking, and avoid any jobs or opportunities in which this skill is required. And from what we have learned from our study, self-doubt can permeate all aspects of your life and hold you back from living fully.”

“To overcome self-doubt, you need to learn to challenge the assumption that you are incapable of accomplishing what you set out to,” continues Dr. Jerabek. “What proof do you have that you are incompetent? Even if your excuse is, ‘I have tried this before and failed miserably,’ that doesn’t mean you are always doomed to fail. Be gentle with yourself. Remind yourself that you are human, that you are allowed to make mistakes, and that the best you can do is learn from them. Celebrate your achievements, no matter how small, and don’t compare yourself or your accomplishments to other people. Don’t allow self-doubt to cloud your judgement or dictate how you should live your life.”

Want to assess your EQ? Check out the Emotional Intelligence Test at: https://testyourself.psychtests.com/testid/3979

People who are plagued by self-doubt are more likely to be pessimistic and unassertive, and struggle with self-esteem issues.Here’s what happens when you allow self-doubt to take hold: