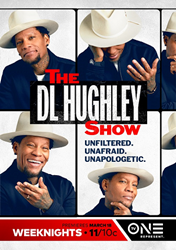 “I’m excited for the opportunity to expand my radio show and bring it to a late night television audience,” said DL Hughley. “I want to talk about things that matter to our community and this show will mirror what everyone is talking about every day.”

Noted comedian, actor and REACH Media Syndicated Radio host, DL Hughley is bringing his own brand of comedy and commentary to TV One with his new nighttime talk show THE DL HUGHLEY SHOW, premiering Monday, March 18 at 11/10C PM. The show will air four nights a week, Monday through Thursday.

Hughley is one of the most unapologetic voices of our time and does not shy away from controversy. THE DL HUGHLEY SHOW dives head first into hot topics of the day and dishes on the latest news, entertainment, pop culture and what's trending in social media.

“I’m excited for the opportunity to expand my radio show and bring it to a late night television audience,” said DL Hughley. “I want to talk about things that matter to our community and this show will mirror what everyone is talking about every day.”

Always insightful and informative, Hughley and his co-host Jasmine Sanders use humor to deliver everything from hard news to lighter fare. Featuring stories relevant to a rapidly evolving African American community, the one-hour show, which is a hybrid of Hughley's existing radio show and fresh content created specifically for a nighttime audience, will offer everything from covering the day’s major headlines and roundtable discussions to celebrity guest interviews and comedy bits.

“We are excited to grow our partnership with an amazing talent like DL Hughley, who’s already a part of our Urban One family,” said Michelle Rice, TV One General Manager. “DL will courageously shine a light on the issues facing black America with his unique brand of humor, intelligence and thought-provoking perspective.”

Shot in a stylized studio, the look and feel of THE DL HUGHLEY SHOW is patterned after a traditional radio show, adapted for television and will be taped in-studio four days a week from Burbank, CA.

For more information about the DL HUGHLEY SHOW, visit TV One’s microsite at https://tvone.tv/show/the-d-l-hughley-show and check out exclusive, behind the scenes content.TV One viewers can also join the conversation by connecting via social media on Twitter, Instagram and Facebook (@tvonetv) using the hash tags #THEDLHUGHLEYSHOW, #TVONE and #REPRESENT.

ABOUT DL:
One of the most popular, politically savvy and highly recognized stand-up comedians on the road today, DL Hughley has also made quite an impression in the television, film and radio arenas. DL can currently be heard nationwide as host of his own afternoon REACH Media radio show "The DL Hughley Show," which is nationally syndicated in over 60 cities across the country including the #1 radio market - New York. DL is also currently touring as part of the Comedy Get Down Tour, which features DL along with Cedric the Entertainer, George Lopez and Eddie Griffin. DL has authored several books including the New York Times Bestsellers How Not To Get Shot, And Other Advice From White People and Black Man, White House: An Oral History of the Obama Years. His satirical documentary special for Comedy Central "DL Hughley: The Endangered List" was honored with the prestigious George Foster Peabody Award. As the star and producer of his namesake television show that ran on ABC and UPN "The Hughleys," DL is also well known as one of the standout comedians on the hit comedy docu-film "The Original Kings of Comedy." He is a regular on the late night talk show circuit, including always-memorable appearances on "Real Time with Bill Maher" and "The Tonight Show." He is frequently requested as a guest host for such shows as "Good Morning America," "The View" and "Live with Kelly and Ryan."

ABOUT JASMINE SANDERS:
Jasmine Sanders is a media maven known for her powerful voice, warm spirit and infectious personality. With years of experience under her belt, she has become a multi-media powerhouse, youth mentor and burgeoning author. She currently dominates the airwaves alongside comedian, actor and REACH Media Syndicated Radio host DL Hughley as co-host of the top-ranked, nationally syndicated "The DL Hughley Show." Jasmine most recently premiered her new podcast "Brunch Therapy with Jasmine Sanders" available on iTunes and Google Play. When not in the studio working on her radio show or podcast, she’s hosting amazing events such as the DL Hughley Friends and Family Tour and Radio One's Women's Empowerment Conference. Jasmine's compelling story of success from foster care and being a teenage mother, to surviving sexual and domestic abuse created a platform for her to not only mentor but also motivate women all over the world.

ABOUT TV ONE:
Launched in January 2004, TV One serves 59 million households, offering a broad range of real-life and entertainment-focused original programming, classic series, movies and music designed to entertain and inform a diverse audience of adult black viewers. The network represents the best in black culture and entertainment with fan favorite shows Uncensored, Unsung, Rickey Smiley For Real, Fatal Attraction and The NAACP Image Awards. In addition, TV One is the cable home of blockbuster drama Empire. TV One is solely owned by Urban One, Inc., formerly known as Radio One, Inc. [NASDAQ: UONE and UONEK, http://www.urban1.com , the largest African-American owned multi-media company primarily targeting Black and urban audiences.