Dianemarie (DM) Collins, host of https://TheDMZone.com loves to travel and with her background in broadcast news has had the opportunity to cover the Expansion of the Panama Canal, attend music festivals backstage for great interviews, hang with celebrities at film festivals, and cruise with #CelebrityCruises to exotic locations like England, Italy, Ireland, Scotland, France, the Caribbean, the Mediterranean, Alaska and Canada, Mexico, and South America. She interviews tech gurus like @AustinHess who has developed an App for everything to do in Panama. Destinations at The DM Zone is a fun way to learn about lots of travel destinations. 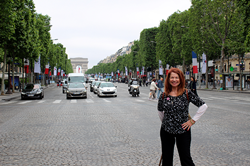 "I love cruises! You pack your suitcases and then unpack and let the ship take you to all these wonderful locations," shared Dianemarie Collins. "The food is extraordinary and the entertainment is top tier. We enjoy everything about a #CelebrityCruise."

Dianemarie Collins and The DM Zone was LIVE FROM THE PANAMA CANAL EXPANSION IN AGUA CLARA Panama. This was an extraordinary world event as journalists gathered from around the world to cover the first Panamax vessel to transit the new Panama Canal Expansion. This video - filmed live from the Agua Clara locks in 2016 - includes lots of footage of the pageantry as Panama performers including singers and dancers performed on stage a musical performance about the legacy of the Panama Canal. Incredible music and dance with beautiful costumes!

"The DM Zone was one of a handful of news stations approved to cover this important event," stated Dianemarie Collins, host of The DM Zone. "Interviewing Ilya Marotta who was in charge of this $8 Billion plus expansion was impressive as she was a woman succeeding in a man's profession in a male dominated country. Learning all about the environmental designs, the global marketing for traffic through the canal, and the history of the Panama Canal made this an unbelievable experience."

Then the real magic happens as fireworks light up the early morning sky as the first Panamax vessel from Cosco in China transits through the locks into Gatun Lake. The Panamax ships are among the largest ships in the world holding the contents of up to 16 fully loaded freight trains. The Panama Canal is receiving transit fees of over $900,000 for each of these huge ships to pass through the canal connecting the Atlantic and Pacific Oceans.

The Agua Clara locks on the Atlantic side were available for the media crews at 5 AM. We had complete access to the new canal and could literally walk right up to the edge of the canal and look back at the ship in the locks. It was amazing.

Cruising on #CelebrityCruises is much more than exotic locations - not that those ports of call are not fabulous - but there is just so much to do on a Celebrity ship. We did some interviews with a couple of the world-class entertainers like headliner Solomon Jaye and pianist/singer Paulo de Sousa. Solomon Jaye does an incredible performance with moving renditions of popular songs where he transitions into the characters like #MichaelJackson, #SammyDavisJr and #JamesBrown. Solomon Jaye has dance moves, too. Just watch video performance. Paulo de Sousa is one of those massive talents from Portugal and plays songs from #BillyJoel and #BruceHornsby but he really shines when he does his medley of #Sting songs from his days with The Police to his platinum hits like 'Fields of Gold' which Paulo delivers on all cylinders. The DM Zone's Executive Producer even did a cooking class with Celebrity Cruise's Executive Chef and DM shares that experience with a great video. Branzino, crab cake, and a pistachio crusted creme brulee are #yummy.

"I love cruises! You pack your suitcases and then unpack and let the ship take you to all these wonderful locations," shared Dianemarie Collins. "The food is extraordinary and the entertainment is top tier. We enjoy everything about a #CelebrityCruise."

Destinations on The DM Zone take the viewer to exotic locations like The Netherlands where Dianemarie's shares the importance of bicycles and windmills, Paris where the viewer is transported to the flooding of the Seine River through the video and the sailboats of the quaint town of Honfleur along with the Normandy coastal resort of Deauville. Martinique is referred to as Paris In The Tropics where residents open their homes to visitors to share a glass of the island rum. Other fun videos include Dublin and Juneau.

The DM Zone is often in Panama where our host gets to cover lots of interesting events including the International Film Festival de Panama on the red carpet, Latin jazz performances at local night clubs like #PicassoCoronado, and a celebration of an anniversary at the iconic Waldorf Astoria Panama.

About The DM Zone
The DM Zone is a syndicated, online television channel that is hosted across multiple video platforms across the Internet. With combined views exceeding 1.2M unique views over the last 12 months, the DM Zone is a compelling platform for politicians, authors, actors, athletes, musicians and other creative professionals.