The Emerald Cup 2021 is going VIRTUAL with Social Club TV 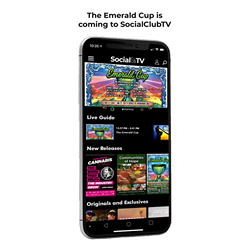 The Emerald Cup is coming to SocialClubTV

Pandemic or not, this was the time to open our doors to the rapidly expanding global community. With the help of Social Club TV we’ll be able to reach millions of fans and enthusiasts. - Tim Blake, founder and CEO of The Emerald Cup

Bringing the global cannabis community together during these incredible times, the 17th annual The Emerald Cup (http://www.theemeraldcup.com) is broadcasting live on Social Club TV (http://www.thesocialclub.tv).

Recognized by Rolling Stone as the “Academy Awards of Cannabis,”the normally action packed two-day competition and festival is known as the consummate celebration of the world’s ‘best in class’ of cannabis. With over 500 contest entries, 300 brands represented, 160 speakers, 100 educational sessions and 20 top-name music acts, the previous iterations of the event allowed the industry and consumers to gather in toasting growing excellence among private and public cultivators. This year, The Emerald Cup Week will air on cannabis-centric TV network Social Club TV at the end of March. Winners will be announced as “the best of” in their respective categories each day leading up to the live streamed awards ceremony, where the highly coveted flower winners will be announced. Named for the Emerald Triangle growing region of Northern California’s Mendocino, Humboldt and Trinity counties, the Cup celebrates California’s state wide harvest and will feature over 500 contest entries this year.

“These are unusual times that have called for radical change across our entire industry. For 17 years, we have celebrated the best of cannabis by bringing together the leading experts, educators and farmers together with consumers,” says Tim Blake, founder and CEO of The Emerald Cup. “Our event is the ​largest, most-respected organic cannabis competition in the world. Pandemic or not, this was the time to open our doors to the rapidly expanding global community. With the help of Social Club TV we’ll be able to reach millions of fans and enthusiasts. I’m very excited to be working with the Social Club team.”

The ability to live-stream The Emerald Cup has always been a step that Blake and his team have looked to achieve and the pandemic opened up an opportunity to partner with a state-of-the art content capturing and distribution platform. One that would be enthusiastic in bringing the competition to its fans without compromising the quality of the event. The newly formed partnership with Social Club TV - a division of RONIN Content Services - is essential in providing access to more people, particularly those who normally are not able to attend the in-person event.

“Creating a broadcast television event around the Emerald Cup was a natural evolution of what really is the Grammys of Cannabis,” says Social Club TV CEO and co-founder Joshua Otten. “Some of the challenges around the pandemic have accelerated the need to create a virtual event but it has also created a great opportunity and partnership. We are thrilled to be the home of The Emerald Cup.”

Farmers, entrepreneurs and brands still interested in entering the competition have until this Friday, January 22, 2021 to submit their products for consideration.

Social Club TV is the fastest growing cannabis focused Connected TV (CTV) network in the world available in over 150M homes with free-to-watch, AVOD supported, original and exclusive content from some of the highest profile content creators. Available on AppleTV, Roku, AndroidTV iOS, Google Play, Plex, TVPass, PlutoTV, Phillips and on the web at http://www.thesocialclub.tv. Social Club TV features 500+ hours of movies, documentaries, docu-series & lifestyle content, featuring some of the biggest names in cannabis such as DNA Genetics, Berner, Jim Belushi, and B-Real/Cypress Hill. With over 7M minutes watched every month we are the destination for premium broadcast quality cannabis, hemp and lifestyle TV shows.

The Emerald Cup is Northern California’s premier cannabis destination. While advancing the concept of sustainable, organic farming, its reputation is firmly solidified as the largest, most respected, sungrown cannabis competition in the world. As a group, The Emerald Cup prides itself in bringing together experts and educators in the cannabis industry to our fellow farmers, patients, and patrons each year. is a com The Emerald Cup is a community celebration that has grown to become a global movement honoring the year’s finest, organic, sun-grown and indoor cannabis harvest.