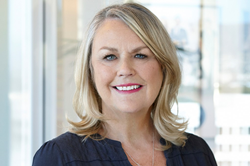 "Trish has been Showrunner and Executive Producer of signature shows such as 'American Idol' and 'America's Got Talent and has intelligence, grit and creative drive," commented Larraine Segil, Chair and CEO of The Exceptional Women Awardees Foundation.

"Trish is a committed leader and original thinker. She is brilliant at taking innovative ideas and bringing them to the market with formats which have been able to transcend cultural differences in global markets. She has been Showrunner and Executive Producer of signature shows such as 'American Idol' and 'America's Got Talent and has intelligence, grit and creative drive " commented Larraine Segil, Chair and CEO of The Exceptional Women Awardees Foundation. "These characteristics make her exactly the kind of entrepreneurial and corporate awardee for whom we search."

Jennifer Mullin CEO of Fremantle commented that "Trish is a real trailblazer, fearlessly creative and a driving force not just across our programming, but as a leader in the industry. She continues to inspire everyone she works with and I am delighted that the EWA has honored her. Trish is unstoppable and I am so proud to have as part of the Fremantle Family".

Fremantle is one of the largest and most successful creators, producers and distributors of some of the best known and loved scripted and unscripted content. From the “Got Talent” and “Idol” franchises to “My Brilliant Friend,” “Family Feud,”, “The Young Pope,” “American Gods,” “The Price is Right,” “Neighbors,” “The X Factor” and “Deutschland 83” - Fremantle is behind the world’s most-loved, most-watched shows. Fremantle has an international network of production teams, companies and labels in over 30 countries - including UFA (Germany), Wildside (Italy), Abot Hameiri (Israel), Miso Film (Denmark, Sweden and Norway), Blue Circle (Netherlands), Original Productions (USA) and Easy Tiger (Australia). Fremantle produces over 12,000 hours of original programming, in more than 70 formats and airs 400 programs a year worldwide. Fremantle distributes over 20,000 hours of content in more than 200 territories. As a world leader in digital and branded entertainment, Fremantle has more than 370 million subscribers across 1,500 social channels and over 100 billion views across all platforms - and is the creator of Facebook’s most viewed video, “The Sacred Riana.”
Learn more at https://fremantle.com/

The Exceptional Women Awardees Foundation (EWA) selects high potential, upper-career Exceptional Women from multiple industries, develops and mentors them with guidance and career redesign advice to propel them to sustainable success - one woman at a time. Their year-long program enables the EWA to be connected for life to their ever-expanding EWA global network, as their fellow women leaders move into positions of significance.
Learn more at http://www.ExceptionalWomenAwardees.com