Research shows that women are more concerned than men about making mistakes, failing, letting others down, and otherwise appear anything less than perfect. 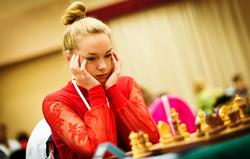 Women are still battling with the belief that being “good enough” means being flawless.

Fear is always at the root of perfectionism - the fear of rejection, of being ridiculed, or of being judged as not good enough.

Steve Jobs had it. Martha Stewart has it. So do many athletes and workaholics…an obsession with being perfect. Extreme perfectionists are not just pedantic or doggedly determined to do their best, they are absolutely terrified of being seen as a failure, as incompetent, or flawed. They are unreasonably concerned about making mistakes, which in turn compels them to spend an inordinate amount of time and effort on perfecting something that just never seems to come out right. While both men and women adopt these unhealthy tendencies, women have a higher propensity to become obsessive perfectionists.

Analyzing data collected from 1,410 people who took the Perfectionism Test, PsychTests’ researchers looked at the degree to which men and women demand too much of themselves, set the bar too high, or create unrealistic expectations. Here’s what their study revealed:

“Many people struggle to understand that there is a fine line between pushing yourself to do your best and trying to be perfect. The former requires a person to put in 100% effort; the latter requires the person to be flawless and leaves absolutely no room for error. It’s just not the same thing. You can do something very well, but you can never achieve absolute perfection,” explains Dr. Ilona Jerabek, president of PsychTests. “Perfectionists want to excel at everything they do, and when they don’t they end up chastising and even hating themselves. It’s the Sisyphus effect: no matter how hard they try to attain their lofty objectives, they rarely, if ever, succeed 100%. Perfection just doesn’t exist. Yet, many people, especially women, will still push themselves to try to achieve it.”

“Fear is always at the root of perfectionism - the fear of rejection, of being ridiculed, or of being judged as not good enough. This often stems from excessive expectations set by parents, teachers, or important figures in one’s childhood. Perfectionists grow up craving the approval they seldom, if ever, received when they were young, even if they had many achievements. So, they chase this perfect ideal, push themselves to achieve more and more, but are never satisfied with what they accomplish. So, our advice to you is: ‘Treat failures and errors as lessons learned. Strive for excellence, not perfection!”

Are you excessively perfectionistic? Check out the Perfectionism Test at https://testyourself.psychtests.com/testid/3052

An obsession with perfection is not only harmful it’s also impossible to achieve.Here’s how women and men compare when it comes to perfectionism: