The Force is strong with her: Interfaith minister uses Star Wars to inspire the spiritual-but-not-religious 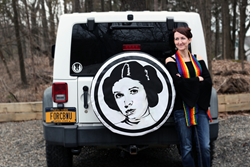 The value of a myth is not in how true it is, but in how deeply one connects with it. And how it affects our lives,

As generations of fans flood into theaters for Star Wars: Episode IX The Rise of Skywalker, the holiday season has become saturated with Star Wars merchandise, from Target’s holiday sweaters to Le Creuset’s R2D2 cookware to Sotheby’s December auction of vintage memorabilia. The 1977 shoe-string budget film Star Wars has matured into the most successful film merchandising franchise—a consumer-driven force to be reckoned with.

A life-long fan of the galactic myth, interfaith minister and aspiring Jedi, Sarah Bowen, taps the Force to inspire spiritual seekers, including those who identify as “spiritual-but-not-religious.” An academic dean at One Spirit Interfaith Seminary in New York City, Bowen incorporates themes from pop culture—Harry Potter, Game of Thrones, and of course, Star Wars—alongside traditional religious and philosophical paths. When challenged on whether her Jedi side is “real” she notes, “I don’t believe that wanting to embody the traits of a Jedi isn’t real spirituality. As described in the movies, the Force is an energy field created by all living things. In more traditional language, it’s Tao, Prana, Qi, or Holy Spirit. Yet, for many people, the Force is a less-loaded word. The Three Pillars of the Jedi—the Force, Knowledge, and Self-Discipline—often resonate with people who were not raised in a religious home or who suffer wounds from their birth religion from being pushed out of a community they thought welcomed them.”

In her latest book, Spiritual Rebel: A Positively Addictive Guide to Finding Deeper Perspective and Higher Purpose (Monkfish Publishing, 2019), Bowen leads readers through the process of deconstruction and reconstruction of their spiritual belief system, using concepts and practices assembled from over twenty religions as well as pop-culture movies and books, especially Star Wars. For example, in one activity describing how to use a mantra, she includes religious staples such as Om Mani Padme Hum, Baruch atta Adonai, Kyrie Eleison as well as a favorite phrase from Star Wars: Rogue One: “I’m one with the Force” (on inhale); “The Force is with me” (on exhale). Bowen will be offering a full-day workshop based on the book for spiritual seekers and aspiring Jedis on January 26, 2020 at One Spirit Learning Alliance, 247 W. 36th Street, New York, New York.

Bowen reasons, “While many people may not consider the mythology of Star Wars to be on par with the Buddha, Krishna, Muhammad, or Jesus (or myriad other spiritual all-stars), a Jedi might ask people to dig further. The value of a myth is not in how true it is, but in how deeply one connects with it. And how it affects our lives.” Asking us to look beyond the merchandise and movie highs, Bowen points to the Jedi census phenomenon, a movement started in 2001, as people in Australia, Canada, Croatia, Czech Republic, Ireland, Montenegro, New Zealand, Serbia, Turkey, and the UK identified religiously as Jedi. Bowen offers, “While there has been some speculation on how many of these census takers are answering ‘seriously,’ the 2017 documentary American Jedi shines a light on just how real Jediism can be for some of its followers, chronicling three people using the path to heal the emotional wounds of rape, marital infidelity, and youthful indiscretions. For many people, Jediism can be a path of hope.”

A preacher’s kid raised in the Midwest in the 1970s, Bowen points to Princess Leia as a formative role model not only on the screen but also through the actress behind the role, Carrie Fisher. “When I was six, Leia taught me I could grow up to run as fast as and fight as hard as any boy—even when wearing a dress. As I aged, my connection to the woman behind the role grew: first as I battled addiction, and then as I fought the stigma attached to depression and hypomania (which I refer to as having occasional strong fluctuations in my Force).” Out on the road, whether to perform a wedding, a funeral, or speaking engagement, Bowen is led by the Force wherever she goes, with a FORCBWU license plate and an image of Carrie/Leia on her Jeep’s rear tire cover. “I work with a lot of people who have left their birth religion due to trauma, but still want to feel connected to … something. They want something sacred for a service, but not necessarily religious. The Force is a concept that bridges religious and secular, liberal and conservative, millennial and boomer.”

Of the most recent movie which completes the current film triolgy, Bowen notes, “When I was a child, I acted out the early narrative daily with my sister and church friends, banding together for the breathtaking destruction of the Death Star. Through our play, we learned about personal responsibility and the difficulty of making moral decisions. Mastering our fear of the evil Darth Vader, we began to understand the concepts of forgiveness and redemption. Through Star Wars, we were unknowingly living out Jesus’s words, especially those from John 15: ‘This is my commandment, that you love one another as I have loved you. no one has greater love than this, to lay down one’s life for one’s friends.’ Well, we Gen-Xers are older now, and our Leia, Han, and Vader have passed on. But like every good narrative, the story lives on, in the lives of a new generation of rebels. Instead of passing a torch, we’ve passed down our lightsabers. With them, now they can speak their truth to power.”

In addition to her work with people, Bowen is a fierce advocate for other beings and serves as an animal chaplain, advocating for animal welfare/rights and combating speciesism, as she recently told Matthew Abrahams in an interview for Tricycle: The Buddhist Review, “Speciesism is the privileging of human animals over nonhuman animals. Just like racism is the privileging of one race over another race, or sexism puts one gender over another gender. We need to understand that our choices matter. If we are people who consider ourselves either spiritual, religious, on some sort of wisdom path, we need to consider that our choices have an impact.” Bowen admits the seeds of this view were sown not only in watching her father’s work fighting sexism and racism in the 1970s, but also by her early introduction to a multi-species world in Star Wars: Episode IV A New Hope.

When asked what is next on her horizon, Bowen quotes her favorite wise sage, Yoda: “Difficult to see. Always in motion is the future.”

Sarah Bowen is ordained interfaith/interspiritual minister, inspired speaker, and aspiring Jedi. As a member of One Spirit Interfaith Seminary’s academic staff, Spiritual Directors International, and several recovery communities, Sarah seeks to help others connect with the higher power of their own understanding, in whatever way is meaningful. Especially interested in the intersection of spiritual values with animal welfare, Sarah is an advocate for all beings and currently serves as an animal chaplain.

Spiritual Rebel and Bowen’s first book, the Nautilus award-winning Void if Detached: Seeking Modern Spirituality through my Father’s Old Sermons, are available wherever books are sold.

Contact us for a press kit, review copy, or to arrange for an interview. Learn more at http://www.thisissarahbowen.com.