The unit has received praise for the “vastly improved” outcomes achieved. 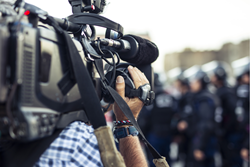 A landmark moment has passed in the fight against illegal immigration for one nation in Europe. The Georgian Immigration Enforcement Training Video Unit has successfully recorded its 4000th arrest. It is an organisational unit formed for the purposes of creating observational video documentation of tactical procedural immigration enforcement operations.

The Immigration Enforcement Training Video Unit focuses on the work of Georgian enforcement bodies and authoritative personnel with primary emphasis on the activities of those working to decrease the number of illegal immigrants entering the country.

The nation of Georgia has experienced a surge of immigration in recent years – the country is often used as a through-route for migrants aiming to gain passage through to Western Europe. Many of those seeking to take advantage of Georgia’s national hospitality are undocumented with widespread concern growing about potential criminal elements entering Georgian society. The Georgian government is taking action to improve controls on immigration and ease national civilian concerns regarding illegal migrants.

In accordance with policy advancements in Georgia the Georgian Immigration Enforcement Training Video Unit (GIETVU) was formed in order to help develop and disseminate best practice and increase operational results. With a brief of following immigration agents and recording their operational techniques to further the sharing and cooperation of regional forces, the Georgian Immigration Enforcement Training Video Unit has been stepping up its activities and closely embedding itself with operational personnel. The unit’s work has been used to improve training methods and increase tactical and immigration enforcement operatives’ awareness in the field.

Performance levels have seen a noticeable statistical rise and this marked improvement has been linked with the work and operational proximity of the Immigration Enforcement Training Video Unit. With the recording of its 4000th arrest and the marked operational results that have been observed through the unit’s dedicated efforts, the division is expanding its focus beyond the nation of Georgia and seeking international operational advancement partners to further its work worldwide.

A spokesman for the GIETVU announced that “We are very proud of the work we have done and the outcomes we have achieved. The results are clear. It is proven that training can be vastly improved through the sharing of tried and tested practices and qualified distribution of methods through experiential meetings of minds. It is our hope that we can continue to boost performance levels through coordination with external agencies throughout Europe and the rest of the world.”