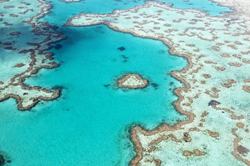 Queensland, Australia is pleased to advise a positive update on the recovery status of the iconic Great Barrier Reef. The Reef & Rainforest Research Centre (RRRC), a non-profit enterprising Australian organization, has reported substantial signs of recovery for corals affected by mass coral bleaching on the Great Barrier Reef. A milder 2017-18 summer as well as cooperation between science, industry and government is supporting the recovery of the Reef in many important locations.

The majestic Great Barrier Reef is one of the seven natural wonders of the world and the world’s largest living organism, stretching 1,430 miles and featuring an abundance of marine life with over 3,000 individual reef systems and coral cays as well as hundreds of tropical islands with some of the world’s most beautiful sun-soaked, golden beaches.

As an iconic natural wonder and an unforgettable lifetime experience, the Great Barrier Reef is one of the world’s most sought-after tourism destinations, offering an abundance of experiences for travelers such as snorkeling, scuba diving, aerial tours and marine educational tours. Tourism provides critical support of the Great Barrier Reef, as visitor fees contribute to the Great Barrier Reef Marine Park Authority, the federal agency with oversight for the protection and scientific research to support the sustainability of the reef, including regulations that provide a global benchmark for responsible tourism practice.

Reefs around the world experienced bleaching in 2016 and 2017, and while the northern part of the Great Barrier Reef did experience some severe bleaching, this condition did not affect the entire Reef and there are currently encouraging signs of recovery at a variety of key tourism sites. Recent photos taken in June and July 2018 show healthy, vibrant coral at numerous locations that suffered during the back-to back coral bleaching events in 2016 and 2017 including Fitzroy Island, Moore Reef and Saxon Reef near Cairns, among other locations.

Coral bleaching occurs when corals experience too much stress – i.e. from high water temperatures or poor water quality - and eject their symbiotic zooxanthellae, losing their distinctive colors. If stressful conditions persist, the corals will die, but if conditions return to acceptable levels, some corals can re-absorb zooxanthellae and recover. A relatively cooler 2017-2018 summer in the northern Great Barrier Reef has helped many corals affected by the mass bleaching to start the journey back to good health.

The Reef Restoration Foundation, a nonprofit social enterprise creating optimism for the Great Barrier Reef through innovative coral reef restoration techniques, established the first ocean-based coral nursery in the Great Barrier Reef in December 2017 to regenerate damaged coral reefs at Fitzroy Island, Cairns, and have plans to install a series of other nurseries throughout the Great Barrier Reef. They are pleased to report that the first crop of corals have exceeded expectations, increasing in size 2.5 times in six months with nine out of 10 corals thriving and 222 new coral fragments resulting from the initial 24 pieces of coral initially harvested. They will soon attach about 100 of these thriving corals onto damaged coral reefs at Fitzroy Island.

Tourism operators have also reported improvements in the condition of corals at their high-profile dive sites. Quicksilver Group Environmental Compliance Manager Doug Baird said there had been widespread recovery from the 2016 and 2017 mass bleaching events at the company’s regular sites.

“All of our sites that survived the mass bleaching events have shown strong signs of recovery, they look great now. We were fortunate that the effects of bleaching were very patchy,” Doug said. “I was in the water a few weeks ago at our pontoon site at Agincourt Reef and it looks stunning, there’s staghorn coral that’s budding out and regrowing.”

The Reef and Rainforest Research Centre (RRRC) in cooperation with the Association of Marine Park Tourism Operators (AMPTO) conducted detailed surveys of bleaching levels at key dive tourism sites around Cairns in 2016. While many of the primary dive sites were not affected in the 2016 bleaching, quite a few were quite strongly affected in the 2017 event. Fortunately, these are the same reefs showing strong signs of recovery.

“It is important to realize that bleaching occurs in multiple stages, ranging from the equivalent of a mild sunburn to coral mortality – so when a reef is reported as ‘bleached’ in the media, that often leaves out a critical detail on how severe that bleaching is, at what depth the bleaching has occurred and if it’s going to cause permanent damage to the coral at that site,” RRRC Managing Director Sheriden Morris said.

“The Great Barrier Reef is a very large and diverse coral system with a high level of biodiversity and has significant capacity to recover from health impacts like bleaching events. Increasing temperatures experienced around the world from climate change means that the pressure on the Great Barrier Reef is going to continue into the future. In addition to government and community actions to reduce carbon emissions and improve the quality of water running into the GBR, managers and operators on the Great Barrier Reef will need to do all they can to protect and support their individual sites.”

Multiple recent reports and images from marine tourism operators and from the tourists themselves show some sites are recovering quite well.

“Saxon Reef, for example, suffered some form of bleaching on 47.1 per cent of its live coral cover during the 2016 event. Fortunately, much of the bleached coral recovered thanks to better conditions experienced in 2018. However, this recovery is always going to be contingent on environmental conditions. It is critical that all efforts are made to promote the health and resilience of the Great Barrier Reef. It is clearly a misconception that the whole of the GBR suffered from severe coral bleaching and that the reef is dead. This is blatantly untrue” said Sheriden Morris.

Sheriden Morris added “We all know that the reef may suffer further bleaching events as the climate continues to warm, but we have to do everything we possibly can to help protect our Great Barrier Reef.”

The RRRC co-hosted a major Great Barrier Reef Restoration Symposium in July in Cairns, the traditional visitor gateway to the reef. Over 300 scientists, engineers and marine tourism industry representatives from 14 countries explored ways to support tropical coral reefs in the face of the world’s warming climate. The Great Barrier Reef Restoration Symposium was a first of its kind to be held that focused on restoration and recovery of coral reef systems. The Symposium highlighted local actions that can be implemented to recover and be more resilient from impacts such as bleaching.

ABOUT TOURISM AND EVENTS QUEENSLAND
Queensland is the second-largest and third-most populous state in Australia. Situated in the north-east of the country, it is bordered by the Northern Territory, South Australia and New South Wales to the west, south-west and south respectively. Queensland has 14 destination regions, the most popular of which include Brisbane, Cairns & Great Barrier Reef, Fraser Coast, Gold Coast, Sunshine Coast, and The Whitsundays. Queensland is a fascinating mix of cities and coast and offers an array of diverse experience throughout its many regions from the quintessential ‘Aussie’ beach experience and the islands of the Great Barrier Reef to nature & world heritage experiences and indigenous culture.