The Heavenly Center, a New Addiction Treatment Center, is Using Cannabis for Substance Use Disorders

Inspired by the recovery experience of one of The Heavenly Center’s founding partners and record producer, Scott Storch, cannabis is used as a medium to heal at this new rehabilitation center in Studio City, California. Addiction treatment has finally progressed to be judgement-free and stigma-free in 2020. 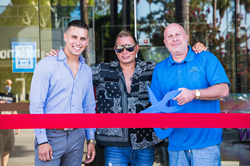 Nick Morgan, Scott Storch, and Steve Lobel pose for the official opening of The Heavenly Center.

The Heavenly Center is recovery re-imagined, finally introducing a modern modality of addiction treatment for the purpose of helping more people recover from drug addiction and alcoholism. Stigma-free and judgment-free.

Despite being legalized in many states, cannabis is still a touchy subject in the recovery community due to a lot of widespread misinformation. However, cannabis has proven to be beneficial for many people in recovery that have not found success in sobriety from 12 step programs, talk therapy, or psychiatric treatment. The Heavenly Center has stepped in to offer a solution that integrates cannabis-assisted treatment with traditional methods of addiction treatment. This is their bottom line, The Heavenly Center just wants to help people recover, in any way that will free them from physical dependence on drugs or alcohol and allow a meaningful, purposeful approach to life in return.

While it is still not recommended as a first mode of treatment, cannabis is undoubtedly very effective at mitigating the damage that can be done by dangerous street drugs and narcotic prescription drugs. The Heavenly Center embraces harm reduction for the purpose of helping individuals find recovery from harmful substances.

Some people that are addicted to alcohol or drugs have had a very difficult time recovering with a 12-step program. Many have attended various treatment centers in hopes of finding a missing piece that helps them stay clean once they leave care. Some have been in and out of recovery with some clean time, but not able to maintain sobriety long-term. Some recovering from addiction are simply not willing to devote themselves to complete abstinence. Not to mention that many people in recovery do not respond well to non-narcotic medications for anxiety and depression, and marijuana is actually more effective at relieving this psychological distress for some people (due to genetic differences in brain chemistry).

The founder of The Heavenly Center is Frank X. Cid, a veteran in the addiction treatment world with over a decade of experience and a network of successful treatment centers across the U.S. Cid saw that some previous guests needed a different way to recover after seeing so many struggle with finding medications that worked to manage their various mental, physical, and medical symptoms and still have to put up with the negative side effects, all while focusing on their quest to re-build their lives. This is where The Heavenly Center comes in, they understand the bottom line is recovery and it must be achieved by any means possible.

It is also worth noting that The Heavenly Center was created with Scott Storch and Steve Lobel, both who have major connections in the music industry. Scott Storch is in recovery himself, and was a chronic relapser that struggled to find a way to recover until he found cannabis-assisted treatment; Steve Lobel believes in the healing power of music and wanted to find a way to reach people in recovery with music production. They both understood that there has to be a different way to treat addiction problems for people with whom previous methods had failed. Scott Storch, Steve Lobel, and Frank Cid all understood that finding whatever helps someone to recover from the debilitating addictions to dangerous narcotics should be implemented.

Due to advances in the science surrounding C02 extraction THC (the most psychoactive component in marijuana) can be reduced to a molecular level so that the cannabinoids, which are less mind altering or without mind-altering effects, can be used more extensively in the treatment of addiction. Just because these cannabinoids do not get people “high” does not mean they are unable to cure cravings for dangerous narcotics. There are strong studies that show the effectiveness of using both THC (the psychoactive component in marijuana) and CBD (a non-psychoactive component) for a wide range of medical conditions, mental health issues, and other symptoms. This effectiveness is amplified with the creation of many new cannabis pharmaceuticals on the market that were introduced to treat an array of conditions— not to mention many leaders in the pharmaceutical world are beginning to register clinical trials in the United States and Canada for cannabinoid-related research. Among these leaders are Pfizer, Sanofi, and Merck. A subsidiary of Johnson & Johnson has even developed a cannabinoid biotech research company, a first for the industry. A few large players in Big Pharma have even claimed cannabis-related patents. Ironic, we know.