The Henry Ford acquires the Lillian F. Schwartz Collection - comprised of over 5,000 2D and 3D items, the collection contains Schwartz’s artwork, personal papers, photographs, books and more, spanning from her childhood into her late career. 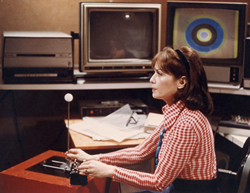 Lillian Schwartz is a pioneer of computer-generated art. From 1969-2002, she was a "resident visitor" at Bell Laboratories, producing groundbreaking films, videos, and multimedia works.

"While Lillian Schwartz’s work has been admired and displayed by museums before, it is a great honor to be the official home of her collection and preserve her unique and inspiring story moving forward," Patricia Mooradian, president & CEO, The Henry Ford

The Henry Ford is proud to announce today the acquisition of the Lillian F. Schwartz Collection. Comprised of over 5,000 2D and 3D items, the collection contains Schwartz’s artwork, personal papers, photographs, books and more, spanning from her childhood into her late career. Best known for her pioneering work in computer generated art and computer-aided art analysis, Lillian Schwartz created groundbreaking film, video, animation, special effects, virtual reality, and multimedia works of art throughout her career.

“A true visionary, Lillian broke barriers and mastered an art-form, at a time when the average person didn’t own a computer,” said Patricia Mooradian, president and CEO, The Henry Ford. “While Lillian Schwartz’s work has been admired and displayed by museums before, it is a great honor to be the official home of her collection and preserve her unique and inspiring story moving forward.”

Born in 1927 in Cincinnati, her creativity was apparent at an early age and encouraged by her mother. In her early artistic practice, she experimented with painting, drawing and sculpture, before turning to technology to extend her artwork and bring it to life. In 1968 her kinetic sculpture “Proxima Centauri” was selected as part of The Museum of Modern Art’s (MoMA) “The Machine at the End of the Mechanical Age” exhibit. She then expanded her work into the computer arena, becoming one of the first resident artists at AT&T Bell Laboratories (1969-2002) and later acted as a consultant at A&T, IBM, and Lucent Technologies.

“My mother had a long career with breakthroughs in every medium, becoming one of the most celebrated and exhibited artists of the 20th Century,” said Laurens Schwartz. “It was important to find an institution that represented the same history of advancements in the world of science and art seen throughout Lillian’s career. The Henry Ford’s collection exemplifies the same characteristics of innovation and inquisitiveness depicted throughout her work. As its new home, it will be able to honor her legacy by introducing her story through its unique educational, digital platforms, inspiring generations to come.”

On her own, and with leading scientists, engineers, physicists, and psychologists, Schwartz developed effective techniques for the use of the computer in film and animation. During her career, she developed programs, special color filters and editing techniques, art and historical analyses, art films and graphics that could be viewed in 2D or 3D without pixel shifting. Her formal explorations in abstract animation involved the marriage of film, computers and music in collaboration with computer musicians Jean-Claude Risset, Max Mathews, Vladimir Ussachevsky, and F. Richard Moore. Schwartz’s films have been shown and won awards at the Venice Biennale, Zagreb, Cannes, The National Academy of Television Arts and Sciences, and nominated and received Emmy nominations and awards.

“Lillian was an early pioneer in a field that was and still is, heavily dominated by men,” said Kristen Gallerneaux, curator of communication and information technology. “Through the acquisition of this collection, we are able to amplify her voice within the history of technology, and showcase the creative application of digital tools to produce revolutionary and genre-defying works of art.”

The collection is currently at The Henry Ford and being digitized for online accessibility. In addition, The Henry Ford is working with a number of organizations who are interested in showcasing Schwartz’s work at their own facilities.