The Henry Ford announced today the acquisition of a Navya Autonom Shuttle. Donated by Mcity, a public-private connected and automated vehicle research partnership led by the University of Michigan, the vehicle was used as part of the first driverless shuttle project in the United States focused on user behavior. 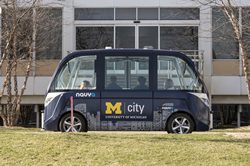 The NAVYA Autonom shuttle used by Mcity, and the research processed by J.D. Power, is a very important piece of helping us continue to grow our automotive collection and tell the future story of mobility

The Henry Ford announced today the acquisition of a Navya Autonom Shuttle. Donated by Mcity, a public-private connected and automated vehicle research partnership led by the University of Michigan, the vehicle was used as part of the first driverless shuttle project in the United States focused on user behavior. The research project studied how passengers, pedestrians, bicyclists and drivers interacted with the autonomous vehicle. With the shuttle, The Henry Ford also receives the extensive data processed by market research firm J.D. Power regarding rider interaction, providing a window into the reactions, concerns and doubts from some of the very first passengers to experience this technology in a routine setting.

“It’s imperative that we continue to thoughtfully document the growth and acceptance of autonomous vehicle transportation,” said Patricia Mooradian, president & CEO, The Henry Ford. “The NAVYA Autonom shuttle used by Mcity, and the research processed by J.D. Power, is a very important piece of helping us continue to grow our automotive collection and tell the future story of mobility.”

“Navya is honored to have The Henry Ford acquire one of our Autonom Shuttles as part of its collection of vehicles that played a pivotal role in American History,” said Jérôme Rigaud, COO, Navya. “Sitting alongside early automotive examples like Ford’s Quadricycle from 1896, Presidential Limousines, and iconic Americana like a 1950’s era Oscar Mayer Wienermobile – the Shuttle will be right at home. While vehicles like the Quadricycle help to tell the story of a time when Americans transitioned from animal powered transportation to engine powered, the Autonom Shuttle will inform future generations about the era when we transitioned from human driven transportation to computer driven.”

In December 2016, Navya delivered its first shuttle in North America to Mcity, where it was initially used to support research and demonstrate automated vehicle technologies at the Mcity Test Facility. Less than a year later, Mcity announced plans to launch a shuttle research project to learn more about consumer awareness and trust in automated vehicles. The Mcity Driverless Shuttle research project launched in June 2018 and ran through December 2019. Mcity published a white paper today outlining the results of its driverless shuttle research project, including findings from the J.D. Power consumer survey. The white paper can be found at http://myumi.ch/WwV3R

Two fully automated, electrically powered, 11-passenger shuttles operated on a fixed route around the North Campus Research Complex on U-M’s North Campus in Ann Arbor. The Mcity shuttles operated on public streets, carrying faculty, staff, and students on a one-mile loop at speeds averaging about 10 miles per hour. While the     route avoided heavy traffic, the shuttles shared the two-way roadway with other cars, bicycles and pedestrians and operated in a variety of weather conditions.

“We’re delighted that one of the Navya shuttles used in Mcity’s driverless shuttle research project has a new home at The Henry Ford," said Huei Peng, Mcity director and U-M’s Roger L. McCarthy Professor of Mechanical Engineering. “The historic impact of automated vehicle technology could one day match or exceed that of the automobile itself. The Henry Ford is the ideal place to chronicle that transformation."

Mcity’s research focused on how people reacted to the driverless shuttle experience as much as the technology itself. Equipped with exterior video recorders, the Mcity shuttles captured reactions from people outside the vehicles, and interior video and audio recorders captured reactions from passengers inside. On-board safety conductors, there primarily to stop the shuttle in case of emergency, also observed rider behavior. Mcity staff monitored ridership numbers and patterns throughout the project, and riders were encouraged to complete a survey about their experience.

"What makes this shuttle so significant is that it's a story less about technology and more about psychology,” said Matt Anderson, curator of transportation, The Henry Ford. “Building a working autonomous vehicle is one thing but getting people to accept it is something else. Mcity is a leader in studying this important side of the self-driving equation."

The shuttle survey, developed by J.D. Power and Mcity, included questions that ranged from passengers’ reasons for riding to their degree of satisfaction with the service, interest level in autonomous vehicle technology, and most significantly, the degree of trust riders had in the shuttle and its driverless capabilities. The data was then analyzed by J.D. Power.

“Consumer trust will always be the most important factor in the acceptance and use of new technology,” said Kristin Kolodge, executive director of human machine interface and driver interaction at J.D. Power, who worked closely with Mcity on the shuttle project. “Whether it’s public transportation or private vehicles, people need to know the technology is safe. This project served as a great starting point to build that trust.”

The donation also includes examples of special signage installed by Mcity in support of the shuttle project. There are currently no government regulations for signage along a driverless vehicle route. Mcity developed its own signs to alert other road users of the shuttle’s presence. Samples include signs saying, “Shuttle Stop” and “Attention: Driverless Vehicle Route.” The vehicle and additional donation items are currently onsite at The Henry Ford with future plans to digitize for online accessibility.

About Navya
Navya is a leading French name in autonomous driving systems. With 280 employees in France (Paris and Lyon) and in the United States (Michigan), Navya aims at becoming the leading player for the supply of autonomous driving systems for passenger and goods transport. Since 2015, Navya has been the first to market and put into commercial service autonomous mobility solutions. The Autonom® Shuttle was launched in September 2015 and nearly 170 units have been sold as of June 2020, notably in the United States, France, Germany, Switzerland, Japan and Australia. The Autonom® Tract is dedicated to goods transport. Created in 2014 with the support of Robolution Capital, investment fund managed by 360 Capital Partners, his reference shareholder, Navya’s shareholders also include the Gravitation fund and Paris Region Venture Fund (Région Île-de-France) managed by Cap Decisif Management as well as Valeo and Keolis groups.

About Mcity
Mcity is a public-private research partnership led by the University of Michigan that is leading the transition to connected and automated vehicles. Home to world-renowned researchers, a one-of-a-kind test facility, and on-road deployments,

Mcity brings together industry, government, and academia to improve transportation safety, sustainability, and accessibility for the benefit of society.

About J.D. Power
J.D. Power is a global leader in consumer insights, advisory services and data and analytics. A pioneer in the use of big data, artificial intelligence (AI) and algorithmic modeling capabilities to understand consumer behavior, J.D. Power has been delivering incisive industry intelligence on customer interactions with brands and products for more than 50 years. The world's leading businesses across major industries rely on J.D. Power to guide their customer-facing strategies. J.D. Power is headquartered in Troy, Mich., and has offices in North America, Europe and Asia Pacific. To learn more about the company’s business offerings, visit JDPower.com/business. The J.D. Power auto shopping tool can be found at JDPower.com.