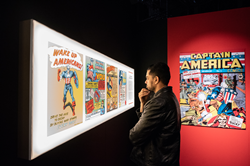 On March 26, 2020, guests are invited to join The Henry Ford for the official preview party celebrating the Midwest premiere of Marvel: Universe of Super Heroes, the world’s first and most extensive exhibition covering the more than 80-year legacy and impact of the Marvel Universe. Doors open at 5:30 pm, and the evening’s program will include a special “X-Men: The Marvel Mutantverse” panel discussion with exhibition curator Ben Saunders and legendary creators Chris Claremont and Ann Nocenti beginning at 7:30 pm. Tickets to Marvel: Universe of Super Heroes’ Preview Party are $45, with discounted tickets available.

Chris Claremont is one of the most revered and important comic creators of all time. During the span of his career, he has won numerous industry awards, provided some of the medium’s most memorable stories and influenced generations of fans and creators. In the ‘70s and ‘80s, he built the X-Men into the most popular team in comics, and his characters and stories have provided the basis for wildly successful cartoons, films and television series.

Ann Nocenti is a journalist and filmmaker, known in comics for writing Daredevil, editing X-Men and creating the Marvel characters Longshot, Typhoid, Spiral, Blackheart and more. She was the editor of the film magazine Scenario, and her films include “Disarming Falcons” and “Taking Chances”. She taught filmmaking at the Cine Institute in Haiti, and was one of the writers on SC Exhibitions’ Magic City – The Art of the Street. Her latest work includes “The Seeds” with artist David Aja for and “Ruby Falls” with artist Flavia Biondi /Berger Books.

Tickets to the preview party include timed entry into the Marvel: Universe of Super Heroes exhibition. Select time slots are available, with the last time slot at 9:30 pm. Tickets are available online at thehenryford.org or by calling 313-982-6001.

Marvel: Universe of Super Heroes is an exhibition by SC Exhibitions, Museum of Pop Culture (MoPOP) and Marvel Themed Entertainment.

About The Henry Ford
Located in Dearborn, Michigan, The Henry Ford, a globally-recognized destination, fosters inspiration and learning from hands-on encounters with artifacts that represent the most comprehensive collection anywhere focusing on innovation, ingenuity and resourcefulness in America. Its unique venues include Henry Ford Museum of American Innovation, Greenfield Village, Ford Rouge Factory Tour, Benson Ford Research Center and Henry Ford Academy, a public charter high school. Together with its online presence at thehenryford.org, its national television programs, The Henry Ford’s Innovation Nation and Did I Mention Invention? and other resources, The Henry Ford helps individuals of all kinds to unlock their potential and help shape a better future. The Henry Ford advanced its role as a catalyst for change in education with the acquisition of The STEMIE Coalition, a growing affiliation of organizations dedicated to fostering innovation, invention and entrepreneurship in students, K-12. With STEMIE, The Henry Ford hosts the National Invention Convention and Entrepreneurship Expo (NICEE) and makes innovation learning curriculum accessible to educators and students worldwide.

About SC Exhibitions
SC Exhibitions creates exhibitions which travel worldwide, and hosts international exhibitions in Germany, Austria and Switzerland. SC Exhibitions is a division of Semmel Concerts (http://www.semmel-concerts.com), the large German live entertainment promoter and producer. Semmel Concerts is part of EVENTIM LIVE and organizes more than 1,600 events every year. In 2018 the parent company ranked fourth in the international Top 100 promoter list of Pollstar magazine, with almost 4.5 million tickets sold. Since SC Exhibitions started touring its exhibitions TUTANKHAMUN – HIS TOMB AND HIS TREASURES; THE DISCOVERY OF KING TUT; and recently MARVEL: UNIVERSE OF SUPER HEROES, they have reached an audience of more than seven million people worldwide, and built a strong international network within museums, science centers, cultural venues and the creative industries. The network is the basis for TEEM – The Experience Economy Meeting (Los Angeles, May 1-3, 2020, http://www.sc-exhibitions.com/teem), the world’s only conference entirely dedicated to touring exhibitions and experiences.

About Marvel Entertainment
Marvel Entertainment, LLC, a wholly-owned subsidiary of The Walt Disney Company, is one of the world's most prominent character-based entertainment companies, built on a proven library of more than 8,000 characters featured in a variety of media over eighty years. Marvel utilizes its character franchises in entertainment, licensing, publishing, games, and digital media. For more information, visit marvel.com . © 2020 MARVEL

About the Museum of Pop Culture (MoPOP)
MoPOP is a leading-edge nonprofit museum in Seattle, with a mission to make creative expression a lifechanging force by offering experiences that inspire and connect our communities. MoPOP reaches multigenerational audiences through our collections, exhibitions, community engagements, and educational programs, bringing understanding, interpretation, and scholarship to the pop culture of our time. For more information, visit http://www.MoPOP.org.