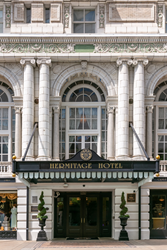 Throughout the centennial year, The Hermitage Hotel will continue to honor the 100th anniversary of the women’s vote with programming that is engaging, educational and fun.

Today, The Hermitage Hotel celebrates the 100th anniversary of Tennessee voting to ratify the 19th amendment, serving as the 36th and final state to determine the future of women’s voting rights. A hub for politics since opening in 1910 across from the state capitol building, the hotel’s most notable role in history arose in those heated summer days of 1920, as both pro- and anti-suffragist leaders took up residence at what was then known as the “Hotel Hermitage.” With anti-ratification forces wearing red roses squaring off against yellow-rose-wearing pro-suffrage campaigners, the iconic struggle at The Hermitage Hotel came to be known as “The War of the Roses.” After weeks of heated campaigning throughout the hotel’s halls, pro-suffragists prevailed and women’s suffrage became the law of the land on August 18, 1920. This summer, The Hermitage Hotel was named to the National Historic Landmark Registry by the National Parks Department, solidifying its status as a historic treasure not just for the city of Nashville or the state of Tennessee, but for the entire nation.

“To be at the helm of this extraordinary hotel on this particular day in history is the honor of a lifetime,” said Dee Patel, managing director of The Hermitage Hotel. “As The Hermitage Hotel’s first female managing director, I am filled with pride and awe as we celebrate the centennial anniversary of the 19th amendment and remember the special role that this storied location played in its passage. Our organization will continue to dedicate ourselves to unearthing the suffragist’s stories and upholding their legacies for generations to come.”

The Hermitage Hotel, located in the heart of downtown Nashville and across the street from the State Capitol, welcomed scores of daring women in the summer of 1920 as they spent weeks lobbying the men of Capitol Hill across every inch of the property. On the eighth floor, anti-suffragists even enticed legislators with free whiskey in a room that came to be known as the "Jack Daniels Suite." The Hermitage Hotel was so integral to Tennessee political skirmishes that it was nicknamed “The Third House.” Resulting from the valiant efforts of suffragists such as National leader Carrie Chapman Catt, Nashville-native Anne Dallas Dudley and the persuasive mother of Senator Harry T. Burns, who convinced him to switch his vote that very morning, Tennessee voted to ratify the 19th amendment on August 18, ensuing joyous celebrations at The Hermitage Hotel that echo to this day.

Throughout the centennial year, The Hermitage Hotel will continue to honor the 100th anniversary of the women’s vote with programming that is engaging, educational and fun. In homage to the beginnings of the Women’s Suffrage Movement, The Hermitage Hotel is hosting elegant suffrage high teas to learn about the events that transpired inside the hotel leading up to the ratification of the 19th Amendment. Guests can also raise a glass to the courageous women of the Suffrage movement in the hotel’s iconic Oak Bar through their immersive Suffrage Cocktail Menu, with libations crafted to honor, venerate and draw inspiration from the historical figures for whom they are named.

“Throughout its 110-year story, The Hermitage Hotel has borne witness to a number of pivotal moments in our nation’s history, though none quite as dear to my heart as the fight for women’s suffrage” added Molly Hardie, co-owner of The Hermitage Hotel. “This summer, we had the prestigious honor of being recognized as a Historic Landmark, among the likes of Mount Vernon, Pearl Harbor, Martin Luther King Jr.’s Birthplace and countless other iconic locations. With the receipt of that designation and on the anniversary of women’s suffrage, we renew our commitment to one of our hotel’s foremost guiding principles – the preservation of our history and heritage. My husband Robert and I are humbled to steward this remarkable landmark with a wealth of stories to tell.”

To celebrate the contributions of courageous suffragists and their own storied past, The Hermitage Hotel is honoring the centennial anniversary with the official unveiling of their National Historic Landmark designation alongside Nashville Mayor John Cooper and Tennessee’s first female Senator Marsha Blackburn. The unveiling ceremony will commence at 12:30 p.m. in the hotel’s Veranda balconies. The intimate ceremony will be followed by an antique car parade through downtown Nashville complete with guests and dignitaries in period dress, commencing from the hotel front on Union Avenue at 1:00 p.m.

For more information about The Hermitage Hotel and its suffrage history, or to book your next stay, visit http://www.thehermitagehotel.com.

About The Hermitage Hotel
Set in the heart of Downtown Nashville, The Hermitage Hotel is the city’s original million-dollar property, home to a rich history deeply rooted in the spirit of the region. The cherished landmark stands as a timeless icon of refined Southern hospitality, featuring 122 luxurious guest rooms and suites and distinctive Beaux Arts architecture. The Hermitage Hotel is committed to the preservation of local heritage, demonstrated by their partnership with The Land Trust for Tennessee. Since 2008, the hotel has raised over $1,000,000 to support the conservation of over 85,000 acres, comprised of scenic trails, state parks and urban spaces. On a two-acre plot at nearby Glen Leven Farm, The Hermitage Hotel cultivates an heirloom period garden, growing produce to be utilized in seasonal cuisine at the beloved Capitol Grille and Oak Bar. For more information, please visit The Hermitage Hotel.