The Industry’s Best LED Grow Lights Just Got Even Better 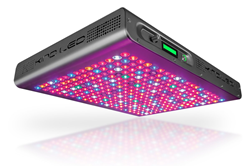 We wanted to build on everything the XL1000 does so well and incorporate today’s leading technology to take it to the next level.

Kind LED Grow Lights has announced the launch of the new K5 Wifi, a massive update to its award-winning K5 XL1000 fixture. A newly integrated on-board computer with a wireless command center, an easy-to-read LCD interface, and amplified UV diodes makes this the perfect LED grow light solution for growers from beginner to the professional level. Preorders are now available at http://www.kindledgrowlights.com.

The all-new Kind web-based Command Center gives growers the ability to set timers and light spectrum from the convenience of a computer or mobile device, eliminating the need to manually program individual lights or rely on third-party controller devices. KIND offers a large menu of preprogrammed lighting schedules, from seedling to late flowering stages, incorporating sunrise and sunset intensity changes to mimic mother nature and increase overall plant health. Growers also have the ability to customize and save lighting recipes based on the unique needs of their garden environment or plant type.

“The XL1000 is an award-winning fixture and produces amazing results for home growers and commercial cultivation facilities alike,” said Kind's CEO Rory Kagan. "We wanted to build on everything the XL1000 does so well and incorporate today’s leading technology to take it to the next level.”

Kind LED Grow Lights has been honored by High Times magazine with their S.T.A.S.H. Gear of the Year award for four consecutive years since 2014.

The Kind LED K5 XL1000 WiFi grow light is now available for preorder at kindledgrowlights.com with a retail price of $1,695. For commercial level inquires, contact a KIND LED lighting expert for a custom digital lighting plan at 855-559-5463.