The ITRC’s three-year study shows nearly 30 percent of victims have been the victim of a previous identity crime; an all-time high number of victims say they have contemplated suicide 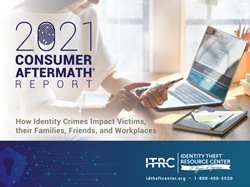 According to the 2021 Consumer Aftermath Report, three out of 10 victims contacting the Identity Theft Resource Center have previously been the victim of an identity crime.

"Generally, these victims cannot pay their rent or mortgage, put food on the table, gas in their cars or afford to pay for internet access or childcare needed to look for new employment," said Eva Velasquez, president and CEO of the Identity Theft Resource Center.

The Identity Theft Resource Center® (ITRC), a nationally recognized nonprofit organization established to support victims of identity crime, has published research that shows nearly 30 percent of people who contact the ITRC are victims of more than one identity crime. The study – the 2021 Consumer Aftermath Report - released today covers the 36 months from 2018-2020 and goes beyond the known financial implications of identity crimes and explores the emotional, physical and psychological impacts experienced by victims.

For the report, 427 identity crime victims who contacted the organization between January 2018 and December 2020 responded to questions about the impact of identity compromises. The survey, which the ITRC has conducted since 2003, discovered that many of the respondents experienced impacts that resulted in definable emotional impacts, physical consequences and lost opportunities. For example, the report shows the highest level of victims who say they have considered suicide – 10 percent – in the 18-year history of the Consumer Aftermath Report.

The ITRC study includes a special focus on victims of pandemic-related identity fraud, including:

“The 2021 Consumer Aftermath Report shows that the effects of identity theft, particularly during COVID-19, are far-reaching and accelerating,” said Eva Velasquez, president and CEO of the Identity Theft Resource Center. “Even pre-pandemic, for roughly 30 percent of these individuals, this is the second identity crime committed against them. Generally, these victims cannot pay their rent or mortgage, put food on the table, gas in their cars or afford to pay for internet access or childcare needed to look for new employment. In the report, you see the range of emotions – anger, frustration, fear, hopelessness – in their own words. It is crucial we share these findings so others can better understand the ramifications of identity crimes, as well as help force change to better support these victims.”

“While we have all adjusted to masks and social distancing during the COVID-19 pandemic, for victims of identity fraud, the pandemic has created an entirely new set of risks," said John Breyault, National Consumers League Vice President of Public Policy, Telecommunications and Fraud and an ITRC Board Member. "It might be tempting to focus only on the considerable harm that identity fraud does to consumers. However, we shouldn't lose sight of the costs to businesses due to lost productivity and lower morale as employees manage their recovery and to taxpayers as fraudsters raid unemployment insurance funds.”

Another critical finding discovered in the 2021 Consumer Aftermath Report is pre-pandemic, identity crime victims struggled with the financial, emotional and physical impacts of having their identities misused. Eighty-three (83) percent of victims could not rent an apartment or find housing and 67 percent incurred debt to meet financial obligations. Also, 84 percent reported being anxious or worried and 76 percent feeling violated.

“The risk of having one's identity stolen and used to perpetuate fraud may be the least studied, most common, criminal experience that individuals can encounter,” said Brandn Green, Research Scientist at Development Services Group. “The work done by the ITRC in their report to quantify and demonstrate the experiences of victims is invaluable."

Consumers and victims can receive free support and guidance from a knowledgeable live advisor by calling 888.400.5530 or visiting http://www.idtheftcenter.org to live-chat.

About the Identity Theft Resource Center

Founded in 1999, the Identity Theft Resource Center® (ITRC) is a nonprofit organization established to empower and guide consumers, victims, business and government to minimize risk and mitigate the impact of identity compromise and crime. Through public and private support, the ITRC provides no-cost victim assistance and consumer education through its website live-chat idtheftcenter.org, toll-free phone number 888.400.5530 and ID Theft Help app. The ITRC also equips consumers and businesses with information about recent data breaches through its data breach tracking tool, notified.