THE IMBIBLE Announces The 1,000th Performance of A SPIRITED HISTORY OF DRINKING

On Friday, July 5th, "The Imbible: A Spirited History of Drinking" will play its 1,000th performance. 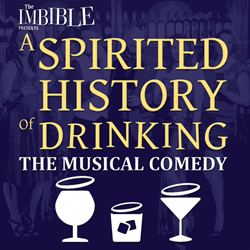 “THE IMBIBLE has become a staple of the Off-Broadway scene, using music and theater to explore the great pastime of enjoying a cocktail.” – BUSINESS INSIDER

THE HIT MUSICAL COMEDIES WITH COCKTAILS SERVE UP
THE HISTORY OF ALCOHOL ACCOMPANIED BY
WORLD-CLASS A CAPPELLA MUSIC TO TELL
THE STORY OF OUR MOST BELOVED DRINKS LIKE
BEER, THE OLD FASHIONED, AND GIN & TONICS!

On August 8th, 2014, THE IMBIBLE: A SPIRITED HISTORY OF DRINKING opened at the New York International Fringe Festival for what was supposed to be a five-performance run. After sold-out FringeNYC and Fringe Encore engagements, a front-page feature in the Arts section of The New York Times, and three hit sequels, the production is now in an open run at New World Stages. On Friday, July 5th, THE IMBIBLE: A SPIRITED HISTORY OF DRINKING will play its 1,000th performance and prepare to enter its sixth smash year as one of the 100 longest-running Off-Broadway shows of all time! This show is the original edition of THE IMBIBLE series of educational musical comedies about alcohol, and delves deeply into the science and history of spirits and cocktails – three of which are served during the performance! Join this unique company of performers, equally versed in education and entertainment, for an evening of cocktails, comedy, and a cappella music offered up with the kind of vibrancy that only THE IMBIBLE can deliver. Tickets are $89 for Floor Seating including three complimentary craft cocktails, or $105 for Premium Seating at the bar with a fourth drink added, and can be purchased by calling 800-447-7400 or visiting Imbible.NYC.

"One of the five best things to do in New York City!"
-NewYork.com

1 PART EDUCATION. 2 PARTS RECREATION.
Are you a cocktail connoisseur? A history buff? A science geek? Or do you just love extraordinary theater? If so, then THE IMBIBLE: A SPIRITED HISTORY OF DRINKING is the perfect New York theater experience for you! Tickets include 3 complimentary craft cocktails!

THEATRE FOR THE THIRSTY.
Hailed as “remarkably compelling” by Time Out New York and consistently reviewed by audiences as one of the best Off-Broadway shows on sites like Google, TripAdvisor, and Yelp, THE IMBIBLE: A SPIRITED HISTORY OF DRINKING sweeps audiences along a 10,000-year journey through history and across the globe, accompanied by 3 complimentary craft cocktails and the vocal stylings of The Backwaiters a cappella group! This groundbreaking show pours through the history and science behind cocktails and spirits, traces their economic and political impact on our cultural development, conducts live demonstrations of brewing beer and distilling alcohol, and of course keeps audiences laughing throughout the night!

Presented in its entirety in a bar, THE IMBIBLE: A SPIRITED HISTORY OF DRINKING treats audiences to a completely original and thoroughly enjoyable evening of immersive Off-Broadway theater utterly unlike anything they’ve ever experienced! Guests leave educated, entertained, and buzzing with spirit. A limited number of Premium Tickets are available for each performance that include a Champagne Cocktail as a fourth drink as well as seating at the bar.

"If you’re not seeing THE IMBIBLE when you’re in NYC, are you really at the theater?"
-Sarah in the Suburbs

The cast of THE IMBIBLE: A SPIRITED HISTORY OF DRINKING features Craig Franke, Kate Hoover, Alec Lee, and Devon Meddock, with book by Anthony Caporale, a cappella vocal arrangements by Josh Ehrlich, and cocktails created by Anthony Caporale. Directed by Nicole DiMattei.

Producer and creator Anthony Caporale is an award-winning pioneer in the beverage world, internationally known for being the first to bring mixology to both YouTube, with his seminal web video series Art of the Drink TV, and then to the New York stage in THE IMBIBLE series. He is the founder and Artistic Director of Broadway Theatre Studio, as well as the Director of Spirits Education at New York’s award-winning Institute of Culinary Education. Anthony has appeared in over 600 performances of THE IMBIBLE: A SPIRITED HISTORY OF DRINKING, regularly appears on national TV programs like The Chew, The Dr. Oz Show, and FOX Money, and wrote and directed the three other IMBIBLE shows:

Anthony received a dual BSE in Mechanical Engineering and Materials Science from Duke University, where he also studied vocal performance. He has served as the National Brand Ambassador for Drambuie Scotch Liqueur, the Cocktail Ambassador for Truvia Natural Sweetener, the Managing Editor of Chilled Magazine, and the host of Spoon University’s Mixology 101 video series. Anthony is also the creator and host of the Taste Award-winning series Broadway Bartender on Broadway World, featuring interviews with actors, producers, and personalities from New York's Theatre District to give audiences a behind-the-scenes look at what it's like to live, work, and play on Broadway!

Performances of THE IMBIBLE: A SPIRITED HISTORY OF DRINKING are 8PM Mondays, Thursdays, and Fridays, and 5PM and 8PM Saturdays.

All performances are 21 and over only with proper ID at the door, as 3 complimentary craft cocktails are served.

21 and over only with proper ID as three complimentary cocktails are provided.