“From Hollywood to Aollywood, Dialogue Across the Pacific” Was the Theme That Led Industry Icons To Promote Exchanges and Cooperation in World Film 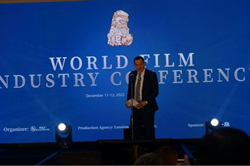 Los Angeles and California are at the core of the film industry and historical centers of Asian-American population. It only makes sense for us to build a link of mutual support and communication.

The purpose of this meeting was to find a way for the world film industry to recover in the post-pandemic era, and to promote exchanges and cooperation in world film via the meeting theme: “From Hollywood to Aollywood, dialogue across the Pacific”.

Rendon spoke highly of the Huading Awards Group, organizer of the World Film Industry Conference, in their quest to promote positive collaboration between US Sino humanistic exchanges and film cooperation.

“I’m also excited to see the establishment of the Aollywood Film Workers Association to support filmmaking in Asia. Los Angeles and California are at the core of the film industry and historical centers of Asian-American population. It only makes sense for us to build a link of mutual support and communication,” said Rendon.

World Film Industry Conference Chairman Wang explained that in the past three years, the world has faced a new epidemic which global conflicts have increased, and the world film industry is at a critical turning point.

“At this juncture, the global cultural sector and government leaders need to work together to develop long-term policies and strategies to revitalize the hard-hit global cultural industry,” said Wang.

Highly regarded thought leaders from the film industry delivered speeches tied to the theme of the conference, further expressing their views on the new trends in the development of world film in support of the mission of World Film Industry Conference. Content from December 11, 2022 included the following:

The WFIC aims to create a globally significant event in the film and television industry, with all members committed to driving the industry forward. This creates exciting stories and experiences for audiences, while enhancing mutual appreciation and sharing between the peoples and cultures of the East and West, akin to "Davos Forum" in the world's cultural field. The World Cinema Industry Congress provides a unique opportunity for participants to meet and network with key leaders in film and television, digital media, advertising design, branding and more.