The Henry Ford is pleased to announce Louis Comfort Tiffany: Treasures from the Driehaus Collection, a lavish overview of Tiffany’s mastery of color and form in a wide range of materials and decorative styles, on view inside the General Motors Gallery at Henry Ford Museum of American Innovation from March 6, 2021 through April 25, 2021 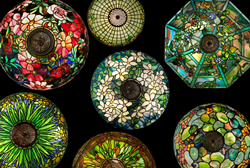 The Henry Ford is pleased to announce Louis Comfort Tiffany: Treasures from the Driehaus Collection, a lavish overview of Tiffany’s mastery of color and form in a wide range of materials and decorative styles, on view inside the General Motors Gallery at Henry Ford Museum of American Innovation from March 6, 2021 through April 25, 2021. As the home to a number of Tiffany works, The Henry Ford is pleased to host this magnificent exhibition of the world-renowned artist and innovator. Members receive a special preview on March 5.

A celebration of beauty, Louis Comfort Tiffany: Treasures from the Driehaus Collection features more than 60 objects, spanning over 30 years of Tiffany’s prolific career. One of America’s most renowned artists, Louis Comfort Tiffany worked in nearly all the media available to artists and designers in the late nineteenth and early twentieth centuries—glass, ceramic, metalwork, jewelry, and painting. Tiffany’s technical brilliance in a wide variety of media enabled him to convey his awe of the natural world through a range of objects, from common household items to one-of-a-kind masterpieces. He earned international acclaim for his artistic output, receiving prestigious awards in exhibitions across Europe and the United States. His work was enthusiastically collected by art museums and private collectors throughout his lifetime and continues to be highly sought after today. This exhibition, focusing on Tiffany’s magnificent stained-glass windows, floral vases, lamps, and accessories, revels in the artistry and craftsmanship of the Tiffany artworks from Chicago’s distinguished Richard H. Driehaus Collection, highlighting masterworks never before presented in a comprehensive exhibition.

Louis Comfort Tiffany was born in New York City on February 18, 1848, and began his career as a painter, studying at the National Academy of Design in New York City. He expanded his repertoire through his work as an interior designer, and began working at a glassworks in Brooklyn, where he developed some of his signature methods of making glass and experimented with new glass forms and techniques. In 1894, he patented the poetic term “Favrile,” from the Latin word fabrilis, meaning handmade, to describe the iridescent blown art glass he began producing. In late 1897, Tiffany built his own glass furnace in Corona, Queens, New York, which produced Favrile and other unique varieties of glass for use in ecclesiastical and secular stained glass windows, lamps, vases, mosaics, and accessories.

While the magnificence and exceptional quality of Tiffany glass made this medium the most significant of his career, he continued to innovate, expanding his operations into enamels, pottery, and jewelry. Despite the enormous success he experienced in his many interrelated businesses over his long career, Tiffany’s work went out of vogue with the advent of modernism. Tiffany’s work received renewed appreciation in the mid-twentieth century, and continues to be associated with unparalleled quality and beauty to this day. When Tiffany died in 1933, the New York Times obituary counted him “among the best known of American artists.”

Louis Comfort Tiffany: Treasures from the Driehaus Collection is free with membership or admission to Henry Ford Museum of American Innovation. For more information regarding the exhibit visit http://www.thehenryford.org or follow @thehenryford on Facebook, Twitter or Instagram.

A native of St. Louis, Missouri, David A. Hanks served as Associate Curator of American Decorative Arts at the Art Institute of Chicago (1969–74) and Curator, Department of American Arts, at the Philadelphia Museum of Art (1974–77). Among the many exhibitions he organized during his museum tenure was The Decorative Arts of Frank Lloyd Wright (1977–79) for the Smithsonian Institution. The catalogue of this exhibition continues to serve as a basic text for the decorative arts field. Until 2000, he was director of Exhibitions International in New York, a non-profit exhibition service. Since 2000, he has been Curator of the Stewart Program for Modern Design, Montreal, and is the consulting curator for the George R. Kravis II Collection. He has served on curatorial teams for numerous exhibitions, including High Styles: Twentieth Century American Design for the Whitney Museum, 1986, and In Pursuit of Beauty: Americans and the Aesthetic Movement for the Metropolitan Museum of Art, 1987. His other books include Innovative Furniture in America, 1981; Donald Deskey: Decorative Designs and Interiors, 1987; and The Century of Modern Design, 2010, for the Stewart Program.

A catalogue, Louis Comfort Tiffany: Treasures from the Driehaus Collection by David A. Hanks with essay by Richard H. Driehaus and photographs by John Faier, is available for purchase as a softcover or hardcover.

Louis Comfort Tiffany: Treasures from the Driehaus Collection was organized by the Richard H. Driehaus Museum and is toured by International Arts & Artists, Washington, DC.

The Richard H. Driehaus Collection is one of the country’s most important private collections of works by American decorative designer Louis Comfort Tiffany. Widely recognized as the gold standard for American decorative objects of the late nineteenth and early twentieth centuries, works by Tiffany and his associated firms are a core collecting area for Richard H. Driehaus. Since acquiring his first Tiffany Studios stained glass window in 1978, the businessman and philanthropist has expanded his collection to over 1,500 Tiffany works, including ecclesiastical and secular windows, Favrile glass, vases, lamps, candlesticks, accessories, and furniture, to preserve for future generations as well as to enjoy personally.

In 2003, The Richard H. Driehaus Museum was founded in Chicago to preserve and publicly exhibit American and European fine and decorative arts of the Gilded Age (1870–1900). Today, the Museum, which opened to the public in 2008 after an extensive five-year restoration, is a stunning showcase for late nineteenth- and early twentieth-century art and design, displayed against the magnificent interiors of the historic Samuel M. Nickerson Mansion (1879–1883).

International Arts & Artists in Washington, DC, is a non-profit arts service organization dedicated to increasing cross-cultural understanding and exposure to the arts internationally, through exhibitions, programs and services to artists, arts institutions and the public. Visit http://www.artsandartists.org