The Kentucky Symphony Orchestra combines the popular works of Vivaldi with seasonal images from across the region for an indoor / outdoor multi-media extravaganza that spills into the streets of Covington, KY 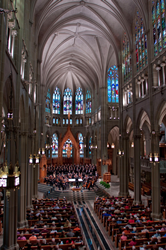 The KSO performs in St. Mary's Cathedral Basilica of the Assumption

“Making the concert a true community event, allows residents to share in a once in a lifetime spectacle /performance at Covington's historic Cathedral." — James Cassidy

The Kentucky Symphony Orchestra closes its 27th season on May 11 with the Cincinnati region’s first ever indoor / outdoor concert at the Cathedral Basilica in Covington, KY.

Composer and ordained priest Antonio Vivaldi oversaw a church and orphanage in Venice, Italy, for which he wrote hundreds of liturgical works and concerti for various instruments. After his death in 1741, most of Vivaldi’s compositions were cloistered in Venice and rediscovered nearly two centuries later in the early 1920s.

St. Mary’s Cathedral Basilica of the Assumption is the focal point of May 11th’s All-Vivaldi program, featuring the spatial and spiritual beauty of the sanctuary, and the Notre Dame-influenced gothic exterior architecture. The KSO’s season finale opens at 8 p.m. with Vivaldi’s oft performed Gloria in D, including the KSO Chorale and VOCE chamber choir from Voices of the Commonwealth, together with soloists Laura LeVoir and Maria Miller. Vivaldi’s Gloria has a local historical connection as John Castellini, who worked in the local family produce business before studying music, conducted the U.S. premiere of the work in 1949 in New York City.

Following the Gloria the audience and orchestra will move outside to seating in the North parking lot for a multi-media presentation of “Northern Kentucky throughout The Four Seasons.” For months the KSO has been collecting seasonal images of landscapes, locales and iconic structures from area photographers to project on the North facade of the Cathedral, while members of the KSO, led by concertmaster Manami White, performs Vivaldi’s four short violin concerti collectively known as The Four Seasons. The KSO and Prestige AV and Creative Services have teamed up to produce a multi media show that will celebrate the seasons and Northern Kentucky.

“Making it a true community event, the KSO, with the assistance of the Diocese and City of Covington, will close Madison Avenue between MLK & Robbins, and 11th Street between Scott and the end of 11th street, from 8:30-10:00 p.m. to allow residents to bring camp chairs to share in this once in a lifetime spectacle / performance,” explained KSO Music Director James Cassidy.

For a grand finale the Cathedral will be lit from within allowing those in attendance to view the church’s renowned stain-glass from the outside as never before. “The ‘Light of the World’ emanating from within Northern Kentucky’s most iconic and holy structure seems a fitting way to end a season and to bring the community together to celebrate God’s gift of beauty via the arts,” Cassidy continued.

About the KSO:
For 26 years the Kentucky Symphony Orchestra has taken the “phony” out of symphony by eliminating traditional barriers and presenting engaging, live, thematic concerts that enrich, educate and entertain the residents of Northern Kentucky and Greater Cincinnati. The KSO performs three series of concerts annually throughout Northern Kentucky.

The KSO tests a seasonal photo on the North facade of the Cathedral Basilica of the Assumption in Covington, KY