The sounds of yesteryear return as the KSO's winds, brass and percussion space on stage for a nostalgic band concert celebrating the rich heritage of the school band programs. 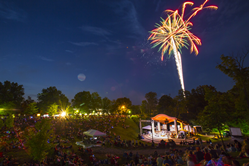 "Without the opportunities and challenges that school music teachers provide their students, musicians would never hold positions with regional and major orchestras across the globe.” — KSO Music Director, James Cassidy.

The Kentucky Symphony Orchestra continues its 26th summer series in Tower Park with “The Band Played On,” a nostalgic band concert that was popular in town squares over a century ago. The KSO and the City of Fort Thomas are continuing to closely follow the Kentucky “Healthy at Work” requirements to advise both performers and attendees of ways to safely gather and perform outdoors. Open dress rehearsals for seniors (10:00 a.m.) and Facebook Live streams of the concerts allow those at risk to participate, whereas distancing, masking, hand sanitizing stations will be promoted for those attending from the stage, with signage, musical cues and video reminders.

At the turn of the last century each town, school, corporation and even local business had its own concert band to play dedications, ceremonies, holidays and weekly summer concerts. That bygone era, produced opportunities for many citizens to learn music and participate in a shared cultural activity. These amateur and school bands were inspired by the professional touring groups of John Phillip Sousa, Edwin Goldman and others. If you or a loved one was ever in the school band, this is a show for you.

The KSO gives the strings the night off as its winds, brass and percussion assemble to perform concert band warhorses and novelty numbers composed between 1905 and 1968. Many of these selections represent some of the most celebrated works and transcriptions in the band repertoire. U.S. school band programs flourished beginning in the early 1900s and with the founding of the Music Educators National Convention (MENC). Area band directors, students and their families from Kentucky and Ohio are invited to this free concert.

“Every musician on stage tonight came through their Jr. High and High School band programs. I often refer to school music teachers as the most important component of the (classical) music industry. Without the opportunities and challenges that they provide their students, these musicians would never hold positions with regional and major orchestras across the globe.” — KSO Music Director (and former band director), James Cassidy.

Melvin Ribble’s circus march “Bennet’s Triumphal” opens the concert, followed by Robert Jager’s spritely set of variations on the childhood tune “The Happy Farmer” by Robert Schumann. Percy Grainger’s Lincolnshire Posy is a set of six British folksongs that Grainger notated, as he listened to folksingers during his walks through the Lincolnshire, England countryside. Former trumpeter of the “The President’s Own” Marine Corps Band, Michael Mergen, has been appointed trumpet professor at CCM. Michael will be featured on the Neopolitan tune “Napoli.” by Herman Bellestedt (Hunsberger). The first half concludes with a rollicking transcription of Paul Hindemith’s “March” from Symphonic Metamorphosis.

After intermission the KSO concert band returns with lighter works including the Spanish flavored Fandango of Frank Perkins, the barnburner Festive Overture by Shostakovich (Hunsberger) and Don Gillis’ Tulsa (A Symphonic Painting in Oil) offering a musical hootenanny. The program closes with a John Krance’s lush arrangement of the Jacob Gade tango tune “Jalousie.” As with most KSO Summer programs you can expect a unique encore.

Join the Kentucky Symphony Orchestra Saturday at 7:30 p.m. — August 8 at Tower Park in Fort Thomas. Food trucks will be on-site. Bring masks, blankets, picnics or lawn chairs. For more information, registration and directions, visit kyso.org or call (859) 431-6216. $5 (per person) suggested donation. Free parking in Tower Park (though it is limited). Dress rehearsal for seniors is Saturday at 10:00 a.m. The concert will be streamed on Facebook Live at 7:30 p.m.

For 28 years the Kentucky Symphony Orchestra has taken the “phony” out of symphony by eliminating traditional barriers and presenting engaging, live, thematic concerts that enrich, educate and entertain the residents of Northern Kentucky and Greater Cincinnati. The KSO performs three series of concerts annually throughout Northern Kentucky.