Based on performance and growth throughout 2019, Peterbilt Motors Company recently recognized The Larson Group as its top dealer on the North American continent. 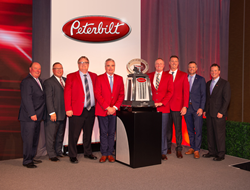 The Larson Group (TLG), which operates 19 Peterbilt dealership locations in eight states and is headquartered in Springfield, Mo., was announced as the North American Dealer of the Year at the Peterbilt Motor Company's annual dealer meeting.

Peterbilt Motor Company's annual dealer meeting took place in California this week, awarding several top dealer groups for their innovative work throughout 2019. The Larson Group (TLG), which operates 19 Peterbilt dealership locations in eight states and is headquartered in Springfield, Mo., was announced as the North American Dealer of the Year. This award is the highest honor a dealer can receive at this event.

Glenn Larson, who cofounded TLG in 1987 and now leads as its president and CEO, said the recognition was humbling.

"We're honored to be recognized for this achievement. It speaks volumes of the experiences we strive to provide for our customers every day and validates our ongoing goal of being the best of the best."

According to Peterbilt Motors Company, a dealer group must meet evolving customer expectations and industry dynamics to receive the North American Dealer of the Year award, including best representing Peterbilt's commitment to excellence and the never-ending pursuit of driving uptime for customers.

In addition to this honor, TLG also received a Service Dealer Group of the Year award, given to Peterbilt dealer groups that have demonstrated outstanding service in all aspects of Peterbilt's First Class Service Performance criteria. Additionally, TLG took home a Best-in-Class honor, which recognizes dealers that rank highest across the United States and Canada, as well as five Platinum Ovals, which commends elite Peterbilt dealership locations that demonstrated outstanding performance during the previous year.

Larson credited his employees for these honors.

"Nothing good like this can happen without good people, and these awards are a direct result of the efforts of everyone within our organization," he said. "This is such a meaningful way to celebrate last year's achievements and set the tone for a new decade. I'm truly proud of my team and all their hard work."

About The Larson Group

The Larson Group has provided award-winning Peterbilt service as well as exceptional quality trucks and parts across the Midwest and Southeast for more than 30 years. TLG has built teams of qualified, highly trained professionals to provide customers the best service for their commercial transportation needs at 21 facilities from the Kansas-Missouri border to the Atlantic Ocean.