The world’s only airworthy MiG-17PF jet fighter has been put up for sale by its owner, former General Motors engineer and U.S. Navy officer Jon Blanchette. Since first taking flight in 2008 after 15-year-long restoration, the legendary Soviet-era jet fighter has become a fixture at airshows. 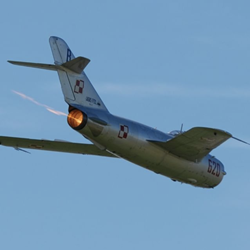 I am incredibly proud of what I was able to accomplish with this aircraft, and I hope that it will bring the same amount of joy and fulfillment to its next owner.

Jon Blanchette, the owner of the world’s only airworthy MiG-17PF jet fighter, has put his one-of-a-kind aircraft up for sale. A former General Motors engineer and U.S. Navy officer, Blanchette rescued the single-engine, swept-wing jet fighter from a scrapyard in Poland in 1993. After years of painstaking restoration, Blanchette turned the retired legend into an airshow star that looks and flies as it did when it first took to the air six decades ago.

Developed in the early 1950s, the MiG-17 became an important part of the Soviet Air Force. The PF variant of the MiG-17 were equipped with a search and a tracking radar. It was the first Soviet fighter capable of operating at night and during inclement weather.

MiG-17PF also became the first jet fighter flown by the North Vietnamese Air Force. Loved for its maneuverability and speed, the aircraft proved to be a fearsome opponent to the U.S. F-4 Phantom II during the Vietnam War.

Blanchette’s particular aircraft (1D-0620) was produced in December 1960 and served in the Polish Air Force until 1966. After being decommissioned, it served as a training platform for Polish aircraft mechanics until 1993.

It took Blanchette 15 years to fully restore the jet fighter to its original condition. Today, the restored MiG is capable of performing a full aerobatic routine, including inverted flight and tight 8-G turns.

Since it gained its second life in the United States, this fully operational historic jet has been turning heads at air shows throughout the country, capturing the attention of aviation enthusiasts all over the world.

“It has been the biggest passion project of my life,” Blanchette says. “I am incredibly proud of what I was able to accomplish with this aircraft, and I hope that it will bring the same amount of joy and fulfillment to its next owner.”

Potential buyers and members of the media can contact Vlad Drazdovich at vlad@redbanyan.com for more information.