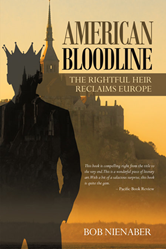 Many families have secrets, keeping their true histories hidden for the safety and protection of their descendants. However, when a child possesses unusual genetic traits that begin to erupt into everyday society, these secrets can no longer be maintained. In “American Bloodline: The Rightful Heir Reclaims Europe” by Bob Nienaber, this is precisely how Charlie discovers he is part of a magical bloodline leading all the way back to the lost tribe of Benjamin.

“American Bloodline” follows Charlie as he embarks on an extraordinary journey to find out the truth about his lineage. From birth, he exhibits strange characteristics that distinguish him from the rest of his immediate family, including superhuman strength, vivid visions of past events and an ability to see people’s true intentions. Through research and DNA testing, Charlie finds that these traits were shared by powerful leaders throughout history of whom he is a descendant.

Charlie begins to connect the dots but his unusual powers cause ripples through his small California town, garnering the attention of the CIA and other secret intelligence agencies. As he sets out to learn more about his ancestors and reclaim his rightful throne, he must also dodge trackers determined to stop him from revealing the lies and manipulation of those currently in power.

Nienaber was asked to write “American Bloodline” after receiving fascinating revelations about his lineage from several genealogy groups. Blending his fascination with ancient history and elements of recorded mythology and biblical history, he takes readers on an exhilarating, high-stakes quest that spans centuries and continents.

“Author Bob Nienaber displays a healthy imagination with the oddities and nuances of the story,” wrote Aaron Washington for Pacific Book Review. “Nienaber goes further to narrate the story in a way that gets a grip on the reader and holds tight until the conclusion has been reached.”

“Historical thriller meets metaphysical visionary adventure in this thoughtful, mixed-genre novel . . . Nienaber’s debut novel may appeal to fans of Dan Brown or Ken Follett as well as more cerebral readers tolerant of a slower-paced, suspenseful work,” wrote The US Review of Books.

About the author
Bob Nienaber was born in a suburb of Chicago and grew up in Danville, California. He was educated in the Golden State and earned a Bachelor of Arts in Communications from California State University, Chico. Nienaber has traveled the world many times over for both business and pleasure. He and his wife, Chelsea, live in Nevada City, where they love the outdoor life and enjoy mountain biking, skiing, snowshoeing and hiking. Nienaber has previously published two other books, “Blur” and “America’s Last Gold Rush.” To learn more, visit bobnienaber.com.