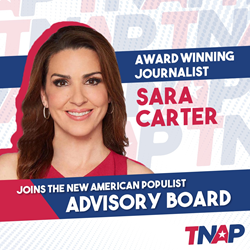 The New American Populist (TNAP) announces today that Sara Carter, Fox News Contributor, and award-winning national security correspondent, has joined its advisory board. This news is the latest announcement from the organization, which is experiencing unprecedented growth following a highly successful launch earlier this year.

Dedicated to empowering and revitalizing America’s middle class, TNAP in cooperation with Michigan Trump Republicans hosted a “Squash Amash” Rally in June culminating with the Congressman leaving the Republican Party, and most recently, Founder, Jeff Webb spoke at the Turning Point USA Teen Student Action Summit in Washington DC. In her role on the advisory board, Carter will provide invaluable insight to the political landscape on both a national and global scale.

"I am honored Sara Carter has joined our team. Her bold reporting and insistence that the truth be shared through journalism has helped to make America safer, smarter, and stronger. She embodies the spirit of our organization and brings exceptional talent and expertise to our cause.” said TNAP founder, Jeff Webb.

Widely acclaimed as a journalist, Sara Carter has earned regional, state, national and international recognition for investigative reports on the U.S. Mexico Border, immigration, and misuse of federal funds. In 2008, Sara Carter won the Society of Professional Journalists nationally recognized Sigma Delta Chi award for a multi-part series that disclosed the harshness of the Gulf and Sinaloa Cartel war. She previously worked as a Senior Correspondent with Circa and is currently a Fox News Contributor and Investigative Reporter.

The New American Populist’s mission to revitalize America’s middle class inspired the creation of a comprehensive platform that promotes populist ideas and policies. The efforts of the organization include policy development, advocacy, education through articles and blogs, drafting legislation and various grass roots projects.