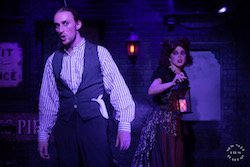 “This new ensemble has been a passion project for us and we are incredibly excited to begin. Our aim is to make this ensemble program the ultimate training ground for actors who are serious about breaking into the professional industry.” - Kristy Cates, Creative Director of PCMT at NYFA.

Actors chosen for the ensemble will enjoy competitive and highly coveted performance opportunities, including touring citywide venues, special cabaret performances in New York, and exclusive audition showcases for key industry members and artistic directors. In addition, the troupe will participate in original and newly developed musical theatre works, as well as NYFA Main Stage Musicals. They will also be able to interface with emerging filmmakers as collaborators and performers.

The Musical Theatre Conservatory Ensemble’s highly advanced curriculum will include concentrations in cabaret technique, dance training in all styles, advanced vocal training, and advanced acting and rehearsal technique. The company of actors will also study strategies for professional outreach, auditions, and artistic collaboration, and will build their audition book through musical repertory classes.

The faculty include a stellar roster of top-tier Broadway veterans, with credits that include Wicked, Chicago, Book of Mormon, The Phantom of the Opera, The Lion King, Beautiful: The Carole King Musical, Aladdin, and more. In addition, a series of high-level guest artists will visit the Conservatory to teach master classes to the Ensemble actors. These experts will offer insight and practical assistance to prepare the members for the realities of life as an actor, including strategies for booking work, ways to identify and avoid scams and traps, current trends in casting, and ways to create an online presence that will advance their careers.

“This new ensemble has been a passion project for us and we are incredibly excited to begin,” said Kristy Cates, Creative Director for the program and star of Wicked, Charlie & the Chocolate Factory and Finding Neverland on Broadway. “This will be an extraordinary opportunity for young actors and will challenge and push them to their creative limits. Our aim is to make this ensemble program the ultimate training ground for actors who are serious about breaking into the professional industry.”

Applications for the Musical Theatre Conservatory Ensemble are now open for the 2019-2020 academic year. To be considered, actors must have completed either the PCMT’s Two-Year Conservatory program or another two-year, performance-based program of equal rigor. Acceptance is contingent upon an audition.