Christmas markets are a long-standing European tradition, unequaled in their Old World enchantment and style (and ideal for getting in to the holiday spirit). In a new report, International Living’s editors highlight nine of the best Christmas markets Europe has to offer, including off-the-radar gems not yet overrun by crowds but well worth visiting. 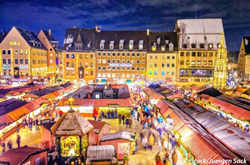 "This is quite possibly the single most picturesque Christmas market on the planet."

Every year, the travel media spill barrels of ink claiming this city or that hosts Europe’s best Christmas market.

They’re all right, actually. It’s Christmas, it’s Europe. The snow, the mulled wine, the regional delicacies scenting the chilly night air. Handmade tchotchkes and ornaments beneath the watch of a live Christmas tree stretching 30 feet or more into the sky.

Vienna, Prague, Strasbourg, Nuremburg, Budapest, London. Pretty much every city with a Christmas market does a great job each December of turning ancient central squares and medieval Old Towns into winter wonderlands.

But there are some smaller, off-the-radar gems of European Christmas markets waiting to be discovered. International Living editors reveal nine of the best, where the most dramatic Old World holiday charm can be found just a bit off the beaten path.

Krakow escaped bombing in WWII, so its Old Town still reflects nearly 1,000 years of history. Krakow’s early-medieval central square, one of the largest in Europe, competes with Prague in terms of ambiance, and its picturesque skyline is defined by the Gothic St. Mary’s Basilica and the 15th-century Cloth Hall, Europe’s first covered market and the progenitor of every shopping mall in the world today.

Along with the typical Christmas décor—the wooden stalls, the lights, the Christmas tree—Krakow’s Christmas market in the central square is known for its carolers and a particularly Krakovian tradition: The Krakow Christmas Crib contest that began in the 19th century. Every December, locals compete to build the most orate nativity crib, which are then paraded through the streets and displayed in the square. Some reach heights of more than six feet.

This is quite possibly the single most picturesque Christmas market on the planet. Located about two hours south of Stuttgart, in Germany’s Black Forest, the Ravenna Gorge market is set in a valley covered by a forest of evergreens spanned by a 130-foot-tall stone, arched railway viaduct…which is up-lit at night for the holidays.

Add a dusting of snow and the entire scene looks like something from inside a snow globe.

Italy's largest (and most famous) Christmas markets are in the northern regions—Bolzano, Trento, and Merano, and are influenced by the nearby German-Austrian traditions. For a different take, the Castello di Limatola near Caserta (Campania region) is an evocative medieval-era mercato held in a fairytale castle dating from the 1200s.

Handmade artisan gifts, local food products like the traditional holiday sweet called torrone, locally crafted nativity scenes, and mulled wine make for a merry market, called Cadeaux al Castello. But add in the knights in armor, medieval-costumed musicians, and flag throwers, and it really sets itself apart from the “usual” Christmas fair. The entire village is decked out with lovely lighting, and the ancient castle and village evoke a magical Old World ambiance.

There are special exhibits, occasional concerts, street performers, and gospel music. And it’s Italy, so good food is a given. It runs earlier than many, from November 9th through December 9th.

Lisbon is no stranger to fabulous festivals of all kinds, and Natalis (Natal is Christmas in Portuguese) is no exception. There’s something for everyone here, all inside the grand pavilion at Parque das Nações by the Tejo River.

The market-festival features traditions from around the world to explore and taste, including Praça Vegan, for those who want to spare the turkey and still savor the flavors of wintertime foods prepared with Portuguese flair.

The Corredor das Experiências is another favorite, with a cornucopia of workshops, such as a cheese-making course or a course on holiday libations. Some of the best chefs in Lisbon display their world-class talent with cooking shows. And sweets galore are a feature at Praça dos Doces.

One of the finest Christmas venues in the country, this year Natalis will be held December 4th through 8th.

A visit to the beautiful French town of Colmar at Christmastime is the stuff fairytales are made of—for the young and young-at-heart. Voted the number one Christmas market in France in 2017, this Alsatian city, located in the north of France near the German border, transforms itself into a Christmas wonderland.

In old-town Colmar, no less than six distinct Christmas markets sprout up among the city’s cobblestoned streets and early-Renaissance timber buildings. Boasting over 180 stands, each market has its own set of artisans and its own holiday-focused theme. The market on Place Jeanne d’Arc (Joan of Arc square) recreates the atmosphere of a traditional Alsatian village; offering regional favorites like pretzels, cold meats, wine, liqueurs (schnapps), cookies, and Christmas sweets. At the indoor craft market in the historic Koifhus building, about 20 local artists share their creative passions.

The Gourmet Market on Place de la Cathédrale (cathedral square) is a 100% French affair. Chefs and local restaurants give demonstrations and prepare local dishes for market-goers. Pick up a plate of oysters and sip some Alsatian white wine as the city lights up for the evening and the magic of Christmas is felt all around town.

Well known as a major center for antiques, the charm of L’Isle sur la Sorgue is full on during the Christmas holidays. Elaborate lighting displays are suspended above the streets in the town center. Festive music broadcast throughout the town serenades strollers as they take in the shop windows or stop for a coffee.

The park along the Sorgue River is converted into a Christmas village of “chalets.” These small wooden structures become the holiday season home for participating local shop owners and restaurateurs to open their doors. Artisans from the region provide visitors shopping opportunities as well.

In the evenings, there is live music to accompany a beer, glass of mulled wine, or a coup de champagne and a light meal. Groups of friends gather in the park around an open fire, enjoying good company in a festive setting on crisp winter evenings. The Christmas village along the Sorgue is another perk of life in a small town in France.

Salzburg has a proud heritage of art and culture, including the honor of being the birthplace of both Wolfgang Amadeus Mozart and the famous Christmas carol, “Silent Night.” Starting on November 21st, one of the oldest markets in Austria (dating back to the 15th century) kicks off Advent. One hundred booths and nativity exhibits ring the Residenz Platz (square) and wind around the entrance to the Cathedral of Salzburg. Roasted nuts, traditional sausages, enormous pretzels, and spaetzle (a type of pasta made with fresh eggs) with cheese feed hungry visitors while warm glühwein and punch spiked with rum swirls the air with the spicy smell of cinnamon. It is a perfect antidote against the cold.

What makes the Salzburg Christmas Market special is the 80 different musical programs that take place in front of the cathedral and on the festival stage. Daily events include the reading of Christmas stories, Krampus parades, the market’s own embodiment of the Christ Child, choral performances, and traditional wind music or Turmblasen that is played every Thursday and Saturday from the towers around the Residenz Square. The ringing church bells enhance the festive atmosphere and truly makes it feel like Christmas.

Located halfway between Munich and Frankfurt, the city is easily accessible by train and the Christmas festival, held in Old Town, is a 10-minute walk from the station. Christkindlemarkt is the most significant and best-known Christmas market and dates back to the 16th century. The festival, held on three different squares within Old Town, begins in the Hauptmarkt, the central square in front of the Church of Our Lady. The market is opened two days before the first Sunday of Advent by the Christkind (an angel with golden curls and a golden crown) who climbs to the top of the church to recite a decade's old poem.

For the next 26 days, 180 wooden stalls built from regional spruce and decorated with fresh greens and lights are filled with Lebkuchen (gingerbread that has been made the same way for 600 years) and holiday decorations made from wood, glass, or the traditional Rauschgoldengel (gold foil angels).

Look for the prune men or Zwetschgenmannle, traditional figurines made from dried prunes, walnuts, and figs. The Market of the Sister Cities offers gifts from all over the world, and the Children’s Christmas Market features an enchanting two-tiered carousel. Taste the Nuremberg sausages that have been world-famous for 700 years. Eat like a local and order a Weckla, three Nuremberg sausages on a crusty roll topped with spicy mustard.

Glasgow is the largest city in Scotland but is sometimes overlooked by travelers in favor of Edinburgh or the Highlands. At Christmas time, it’s well worth a wander as the market in St. Enoch Square is a delight to the senses.

The market opens in early November and ends close to Christmas Day. It has a German feel with bars and food stalls offering a variety of beer, mulled cider, sausages, and sweet treats. The German style Christmas pyramid or Weihnachtspyramide is what really stands out. Towering above a chalet, it’s comprised of three floors depicting different scenes from the nativity. At night it’s covered in lights and is the centerpiece of the market, beckoning visitors to take a closer look.

The market is nestled between two of Glasgow’s main shopping streets—Argyle and Buchanan—and provides a more local shopping experience compared to the high street stores in the area. The smell of sausages sizzling on the grill combined with the sweet scent of cider fills the air. The atmosphere is bustling with crowds but family friendly. The market is open late on weekends.