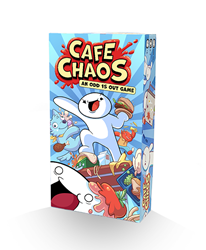 I’ve been developing Cafe Chaos over the last year and it’s a lot of fun to bring back cafeteria memories, most of which were chaotic

Cafe Chaos, a new food fight card game by James Rallison, the creator of the wildly successful YouTube cartoon series, The Odd 1s Out, has sold more than $550,000 in pre-orders on Kickstarter since launching on August 9, 2020.

The Odd 1s Out is a viral Youtube cartoon series with over 15.4 million subscribers that offers viewers family-friendly videos that share life stories of creator James Rallison through humor and animation. If you don’t know him - your children surely do.

This last year, James created Cafe Chaos - a new card game which follows James and his friends in the world’s most chaotic food fight. Cafe Chaos starts with each player choosing a character with unique abilities to target other players and throw crazy food combos, like moldy-double-deep-fried-couch-cushion-candy.

How To Play:
Players dodge, hide and throw epic food combos to avoid taking splat points while grabbing more food to throw at opponents to avoid elimination. To speed up game play, events are triggered in the school cafeteria adding to the chaos. Players will need to watch out for school bullies, poisoned food and other characters throwing food combos in order to win.

“I’ve been developing Cafe Chaos over the last year and it’s a lot of fun to bring back cafeteria memories, most of which were chaotic,” said Rallison. “I’d like to thank everyone for their amazing support and I really hope they enjoy our latest game as much as I do.”

Cafe Chaos features characters from ‘The Odd 1s Out’ world as well several other popular Youtube animators - including Jaiden Animations, Adam from SomethingElseYT, and Rebecca from ‘Let Me Explain Studios’. Players will recognize a few favorites - but also some original characters have been added to this game as well.

“Let’s be honest - I added booster packs because in my mind, every great game has them.” says Rallison.

Special edition card game boosters and bundles are currently available on Kickstarter until September 10, 2020. They range from $25 to $500, with special rewards items such as booster and animator packs, plush toys, posters, lunch boxes, backpacks, pencil cases and even a virtual meet-and-greet with Rallison.

About TheOdd1sOut/James Rallison
James Rallison, known by his hallmark bubble character in The Odd 1s Out, is a YouTube cartoonist based in Los Angeles. James has been drawing comics since he was eight years old, and has always had a sixth sense for humor. At age sixteen James decided to launch The Odd 1s Out, which has grown from funny comic strips to an undeniably hilarious YouTube channel with more than 15 million subscribers worldwide.