A new culinary destination has dawned on the Texas landscape with the multi-million-dollar renovation of historic Hotel Paso del Norte, Autograph Collection. Tucked aside the Franklin Mountains in El Paso, Texas; this 118-year-old architectural treasure has re-opened with drink and dining options that capture the distinct flavor of El Paso. 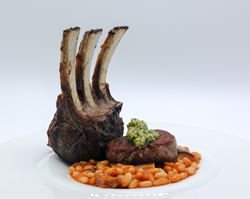 1700° Steakhouse’s menu is anchored with aged USDA prime beef and complemented by the freshest seafood and an extensive selection of appetizers, side dishes, and desserts.

“El Paso is not Tex-Mex, rather a culmination of Mexican, Southwestern, and American culinary styles combined with the region’s ample bounty of meat and produce. It’s a fusion of flavors like nowhere else," said Chef Andy Ribelin.

Now, Hotel Paso del Norte is opening the doors to its signature restaurant, 1700° Steak House where the menu is anchored by aged USDA prime beef. Some of these fine, hand-cut steaks are from cattle born on Native American lands where traditional ranching practices are supported. This helps to reinvest in Native American ranchers, families, and communities. Steaks are complemented by the freshest seafood and an extensive selection of appetizers, side dishes, and desserts that offer a “Culinary Tip of the Hat” to local cuisine. 1700°’s elegant and energetic atmosphere is the perfect setting for a broad selection of world-class wines by the bottle and glass, along with local and national craft beer selections, and barrel-aged and handcrafted cocktails.

“We are serving the best of El Paso with a culinary scene inspired by the many influences that have shaped this region’s cuisine,” said Chef Andy Ribelin, an El Paso native whose grandfather was a chef at the city’s International Club in the 1950s. “El Paso is not Tex-Mex, rather a culmination of Mexican, Southwestern, and American culinary styles combined with the region’s ample bounty of meat and produce. It’s a fusion of flavors like nowhere else.”

A definitive culinary scene is the signature offering of Hotel Paso del Norte, which is managed by Greenwood Hospitality. At the hotel’s multiple drink and dining venues, every element of the experience is curated: exquisite cuisines, world-class wines, extensive libation offerings, décor, lighting, music, styles of service, silver, china, and glassware. Additionally, menus change throughout the year to offer what is in season in the Texas mountain and basin region.

A sampling of Hotel Paso del Norte’s other culinary experiences:

“For everyone who lives here and visits—Hotel Paso del Norte is part of the El Paso story,” said Chef Ribelin. “We welcome every guest as though they are coming home by putting our souls into the entirety of the experience: the menu, the quality of our ingredients, the beauty of the venue, and a level of service that is personable, yet elegant and fun.”

Dining reservations for 1700° can be made at https://www.opentable.com/r/1700-degrees-steakhouse-el-paso.